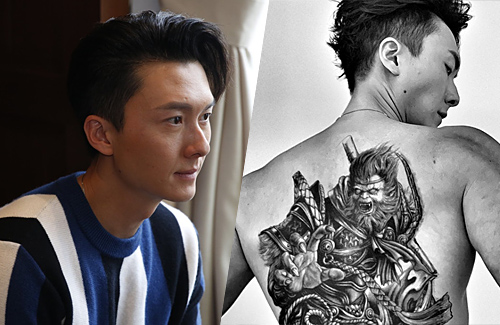 Vincent Wong (王浩信) has been busy filming for TVB’s upcoming drama Al Cappuccino <極度怪咖>. For the new drama, he will have a kissing scene with Owen Cheung (張振朗), Vincent commented, “I feel that we have built a true brotherhood. I’ve never had to kiss a man before, so this will be a new challenge for me. We have a lot of fun filming together though; I don’t need to go to the gym anymore because we laugh so much that I’m developing abs!”

He will portray an actor who is obsessed with acting. He finishes an acting course in the United States and returns to Hong Kong in hopes of meeting his idol portrayed by Samantha Ko (高海寧). Upon his return, he gets looped into a police case. While pretending to be a triad boss, Vincent is actually serving as an undercover agent. To suit his character, Vincent’s back was decorated with a temporary tattoo.

When asked of his plans for Chinese New Year, Vincent will visit his elders and try to get some much needed rest. Due to his new role having heavy screen time, he hopes to make the most of his vacation by spending time with his friends and family. “I’m also ethnically half Xin Jiang, so I’ll be making lots of food that I really enjoy like noodles, dumplings, lamb skewers, sesame balls, and radish cake.”