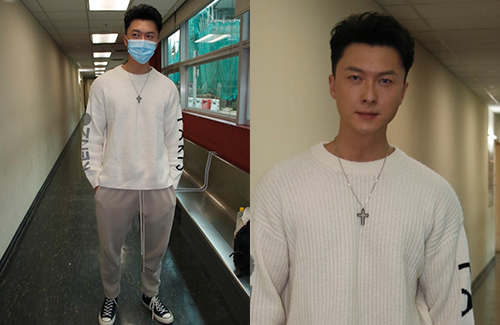 After a three-day thorough sanitization effort, TVB’s Legal Mavericks 2 <踩過界II> is back in business. Today, lead star Vincent Wong (王浩信) was seen back at TVB Studios in Tseung Kwan O to resume work for the show. The actor arrived wearing a face mask.

Production for Legal Mavericks 2 was halted for three days due to several of its cast members feeling unwell. Fortunately, none was sick with the flu.

“I’ve been feeling unwell for days,”, said Vincent. “The show is a legal drama so there’s a lot of talking. I was talking nonstop for days, and that got my throat to feel a little sick. But still, just for precaution, I did isolate myself.”

Asking if he has seen a doctor, he said, “No. I actually don’t seek western medicine very much. I feel much better now that I’ve rested.” Vincent reassured reporters that he wasn’t sick with the flu. “I didn’t have the symptoms, such as a fever or feeling fatigue. My throat just felt uncomfortable.” It eventually worsened, and Vincent started to get headaches, dizziness, and even started vomiting.

Though shutting down an entire production for a few days seems excessive, Vincent said extra precautions should be taken. “These symptoms shouldn’t take lightly of course, especially nowadays. None of us want to stop working, but for the safety of our families and the people around us, we have to take more responsibility over our health.”

With 18 confirmed cases and one death of the Wuhan coronavirus in Hong Kong, TVB are taking extra preventative measures on set. “Several sanitization machines are on set and in the parking lot. We’re postponing crowded scenes,” shared Vincent.

Pointing out that Legal Mavericks 2 is slated to film overseas in Myanmar soon, Vincent said, “We’re waiting for arrangements. If it gets too dangerous to travel, the script will be changed.”