Wayne Lai (黎耀祥) treats his career and his family very seriously. Married happily for 22 years with his wife and manager Julia Leung (梁耀蓮), few people know that Wayne had a divorce early in his career. As Wayne shares his personal life with his fans, he reflects on his regret and guilt towards his ex-wife.

Becoming an Actor and His First Marriage

At a young age, Wayne was passionate about acting and wanted to become an actor. However, his father wanted Wayne to have a white-collar job and after graduation, he worked as a clerk in TVB’s business department. Unable to give up his dream, Wayne joined TVB’s acting class where he caught the attention of producer Lee Tim Sing (李添勝). Tim Gor praised Wayne as “the trainee with the skills closest to a professional actor” and recommended him to become a TVB artiste in 1986.

For many years while working at as a actor, Wayne’s talent was underutilized and his career had a slow start. During this period, Wayne and his girlfriend of 10 years registered their marriage locally but their marriage only lasted for a year. As Wayne reflected on his first marriage, he was filled with regret and guilt, “My first marriage was the worst mistake in my life. I always hoped that I could be a good person and a filial son.  It’s because I didn’t know how to choose. I was wrong and I hurt another person [ex-wife]. Then I hurt my mother’s feelings.”

While Wayne got married to meet his parent’s expectations, his divorce resulted in a rift with his mother and the two did not talk for two years. Acknowledging that his first marriage failed because he married the wrong person for the wrong reasons, Wayne felt responsible for the divorce. 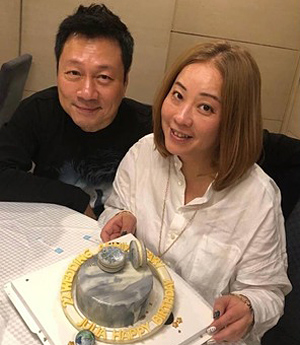 After his divorce, Wayne met Julia who was Rachel Lee’s (李麗珍) assistant at that time. The two dated for four years, got married and even have a son who is now 21 years old. With his wife’s support, Wayne slowly developed his career.

In 2008, Wayne finally won the Best Supporting Actor Award for his role in The Gentle Crackdown II <秀才愛上兵>. In 2009, Wayne’s career had a breakthrough after starring in Rosy Business <巾幗梟雄> and his talent was recognized with more awards. Now a three-time TVB Best Actor, Wayne can allow his family to live comfortably. He knows he can depend on his wife for love and support every step of the way.

This year, Wayne celebrates his 22-year anniversary with his wife. Wayne marked the occasion by gifting his wife a nice diamond accessory and declared his love on his social media page, “Hope to protect all the beautiful days ahead. Even through the difficulties, we will always be together.”