What Made Anita Yuen Want to Hit Chilam? 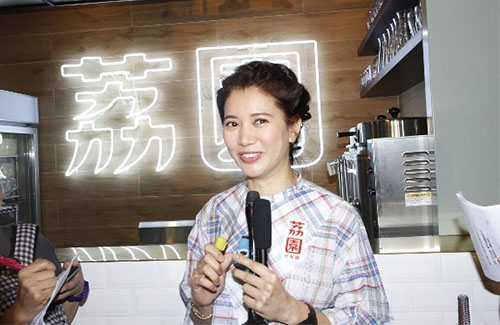 Anita Yuen (袁詠儀) attended a restaurant opening in Tsim Sha Tsui yesterday, where she showed off her talent in iced pineapple juice. The restaurant was renovated in a way that reminded customers of the Lai Chi Kok Amusement Park, which closed down in early 1997. Anita said the restaurant brought back many childhood memories, and that some her favorite things to do was to feet bananas to the zoo elephants. Expressing her love for animals and nature, Anita hope hopes to instill the same passion in her 10-year-old son Morton Cheung (張慕童). Whenever the family travels out of the country, the zoo would always be the first thing Anita would take her son to visit.

Despite her fondness for the amusement park, Anita never visited the park with her then boyfriend and now husband, Julian Chilam Cheung (張智霖). She said, “We started off as an underground relationship, so we usually went on movie dates. That way no one would be able to see us. Of course we don’t need to do that anymore.”

In a social media live video, Anita looked visibly upset after Chilam urged their son to speak in English. Anita explained, “Because my son attends an international school, Cantonese isn’t really his mother tongue anymore. Now, I would always reply to him in Cantonese, even if he spoke English to me. I don’t want him to forget the language. His Cantonese really did improve a lot, but then my husband told him to speak English, so how can I not hit him after that?” Nonetheless, Anita does not regret enrolling Morton into an international school, expressing that her son is at a very “happy and positive” place.

Asking if her son sees her as a ‘tiger mom’, Anita said, “No, but whenever I give him my approval, he tends to hesitate. That’s because, in his eyes, I always say no to him. I need to reflect on that. I know I have a temper, and my mouth works faster than my brain. I really need to learn to control that for my son.”

1 comment to What Made Anita Yuen Want to Hit Chilam?