Why Francis Ng Chose Nancy Wu as His Leading Lady 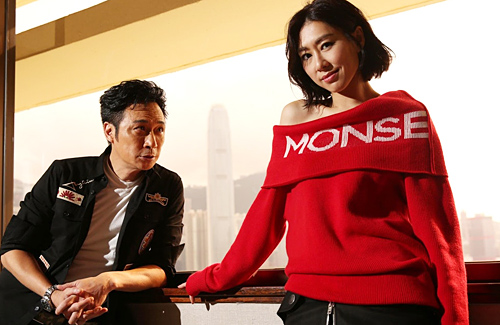 The new comedy film, Men on the Dragon <逆流大叔>, stars Film King Francis Ng (吳鎮宇) and TV Queen Nancy Wu (胡定欣). The film revolves around a group of middle-aged friends and coworkers who join their company’s dragon boat team in hopes of retaining their jobs and surviving staff lay-offs. Nancy stars as a single mother and is also Francis’ love interest. The film is the directorial debut of Sunny Chan (陳詠燊).

Francis, who stars in the movie without pay, was given the freedom to choose his costar. He chose Nancy to be the main female lead. Francis explained, “[The crew] had a meeting to select an actress for the role. Of course they had to ask me. They were stumped about which actress to choose, so I gave them some parameters: they should find someone who has never filmed a movie before, but this person needs to be popular with the audience. This person must also not be afraid of me.”

These factors already severely limited the candidate pool. Francis’ mind immediately shot back to his Triumph in the Skies <衝上雲霄> costar, Nancy Wu, whom he got along with during the filming in 2003 Although Nancy was a newcomer at the time, she talked and laughed freely with Francis when the cameras stopped rolling. Her costars, in contrast, remained anxious and nervous around the notoriously hot-tempered actor.

Nancy laughed, “He thinks I’m not afraid of him! Actually, there were times when I can relax around him. During breaks, he would suddenly say a joke and I would burst out laughing. This is just his personality. It’s not like he is deliberately portraying himself as a certain type of person.”

After filming of Triumph in the Skies ended, Francis continued to pay attention to Nancy’s career and dramas. His most memorable role of Nancy’s was when she portrayed a mute girl in Gloves Come Off <拳王>. “When I saw Nancy’s portrayal, I wondered how she was able to portray it so well. At the very least, she was able to bring out the unique disposition of the character. A lot of people would only portray the two-dimensional emotions of happiness and sadness of the character, and that’s it. That is just how television is. But being able to portray a well-fleshed character is what’s important.

On being selected for her first film role, Nancy said, “When I first entered the industry, Francis already knew me. He watched me grow through the years. Today, he has finally sought me out to film my first movie. I believe he has his reasons. I just need to do my best.”

“Men on the Dragon” Trailer