With the third day of Lunar New Year coinciding with Valentine’s Day this year, it’s an especially special day for Wong Cho Lam (王祖藍) and Leanne Li (李亞男), as it is also their sixth wedding anniversary. Parents to two girls, Gabrielle Wong Tian Wan (王天韻) and Hayley Wong Hoi Ching (王海靜), the couple sat down and shared their secret to maintaining a loving marriage.

Cho Lam and Leanne expressed that the secret to a great marriage is living simply and happily. Leanne praised her husband as very detail-oriented, independent, talented, and handsome. Even though Cho Lam is often made fun of for his short stature, Leanne thinks he is very tall in her heart for all his great qualities. Likewise, Cho Lam thinks Leanne is a wife who deserves over 200 points. He gushed, “It is important to find someone in your life that embodies grace, and for me, it is her.”

Since they usually celebrate their anniversary on a boat or visit a high tower, they plan on taking a boat tour around Huangpu in Shanghai and then enjoying a nice dinner inside the Oriental Pearl TV Tower this year instead. Cho Lam laughed and said, “I am very grateful that our marriage is very simple and happy. We say ‘I love you’ and ‘I miss you’ every single day. When she is in the bedroom, I will miss her even if I am just in the kitchen. I bet anyone with diabetes would want to stay away from (our sweetness)!”

Leanne Gets Taller After Childbirth

Surrounded by three ladies in the house, Cho Lam is outnumbered and soon his daughters will be taller than him. Leanne said, “[Gabrielle] has already surpassed the standard height of more than 300 million people. She is only two years old but she is already 85 centimeters tall, which is half her father’s height. My husband is concerned about what will happen when she is 12. I grow a centimeter every time I give birth so I already gained two centimeters. My husband told me I shouldn’t have any more children.”

While Cho Lam expressed that he doesn’t know if they’ll have more children, he said, “We are happy with two right now because we planned on having two kids within three years. Within these two years, Leanne couldn’t eat a lot of her favorite foods, which is difficult. Even when she dreams, she thinks of cold foods and other junk foods from our dating days.”

The Birth of Their Youngest Daughter

However, Leanne pulled through and gave birth to their youngest daughter Hayley two months ago in Shanghai. Cho Lam recalled, “The doctor in the operating room broadcasted “The Angel Who Fell from the Sky” <跌落凡間的天使>. It was weird listening to my own song during the birth, so I asked them to play Jacky Cheung’s (張學友)“Love You More Each Day” <每天愛你多一些> instead, which was the song we played during my first daughter’s birth. I want to thank Jacky for accompanying me during both my daughters’ births.”

He continued to share that he didn’t pay much attention to the music this time around because he didn’t want to miss the picture-perfect moment of him cutting the umbilical cord. Unfortunately, the nurse took the photo after he finished cutting, and he joked that he couldn’t undo the cutting ceremony. Leanne, on the other hand, expressed that the birthing process was very smooth. She added that her tall stature helped.

Cho Lam shared, “My youngest daughter was born during a pandemic but she is growing up peacefully, so we named her Hoi Ching. We also chose this name to remember her birth in Shanghai, so there is more than one meaning.”

He laughed and said it sounds like a real estate property name, just like her other daughter’s. He explained, “My oldest daughter is called Tian Wan because I really like music. When she was still in her mother’s stomach, she would kick when she heard musicals but not to pop music. I feel like she has a natural understanding of music.”

Working During the Pandemic

Aside from his personal life, Cho Lam is also enjoying his career. With his return to TVB as a Chief Creative Officer, rumors are swirling that Cho Lam would film a historic comedy-drama in April. He said, “We are still planning but we are focused on finding the balance between variety shows and drama productions right now.”

In regards to Liza Wang’s (汪明荃) comment that there should be more game and singing shows, he said, “She already told me before. Right now it is important to unify the company. I go to work every single day because I am also an employee. I hope to work well and happily with the team as I do with my marriage.” 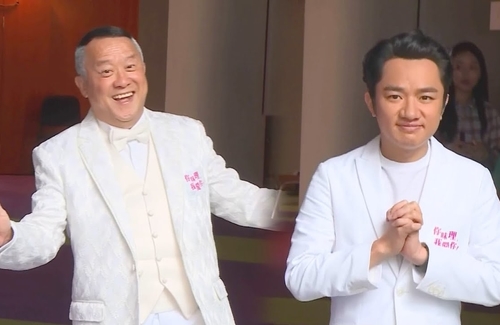