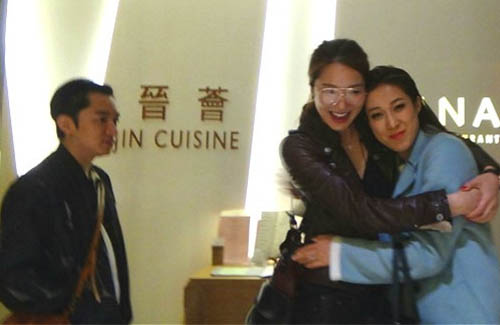 Reporters speculated that the dinner was work-related, as Yuen Wah (元華) was reportedly also at the restaurant. It seemed likely, at the time, that Cho-lam and Linda were in discussions of a new movie collaboration.

When the trio left the restaurant together at approximately 11 p.m., they were greeted by a hoard of reporters. Cho-lam denied the collaboration speculations, saying, “It was just a dinner!”

Leanne then hugged Linda and said, “She just came back so I had to meet up with her right away.” Cho-lam added, “This actually has nothing to do with me!” Leanne joked, “He’s just a passerby!”

Reporters then mentioned their close friend Grace Wong (王君馨), who will be getting married sometime this year. Leanne and Linda said they’ve already received the invite to be her bridesmaids. As for when the wedding would be held, the duo said to let Grace announce the news herself.