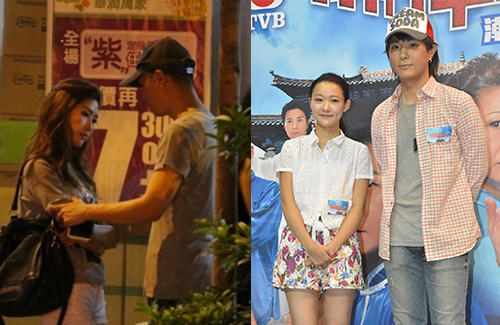 Wudang Rules <潮拜武當> star Stanley Cheung (張景淳) was caught publicly cheating on his girlfriend with costar Regen Cheung (張惠雅), leading to a very messy breakup in the streets. Stanley, who has been dating 2008 Miss Chinese International contestant Jackie Song (宋雙佳) since 2010, begged his girlfriend of six years to forgive him while they were seated inside his car.

Stanley drove in circles slowly for half an hour before parking on the side of Wan Po Road in Tseung Kwan O. Although the windows and doors of his car were closed, Jackie was speaking very loudly and their conversation could be heard in the quiet street of the night.

Jackie was heard saying, “I can’t. I can’t accept this. Don’t be like this!” Stanley was then heard repeatedly saying, “Don’t! I will change! Don’t!” His eyes were brimmed with tears as he begged. Because Stanley was parked in a restricted area, he drove away a few minutes later.

Stanley, who debuted eight years ago, shot to fame after starring in the 2011 hit series When Heaven Burns <天與地>. He became a topic of interest for numerous tabloids, and his wealthy background came to light. In 2011, Jackie admitted in an interview that she had been dating Stanley since 2010. The pair often shared their selfies on their official Weibo blogs, earning the blessings of many fans.

Stanley met former HotCha member Regen while the pair were shooting the TVB kung fu drama Wudang Rules in late 2014. Coincidentally, this was during the time when Stanley and Jackie were rumored to have fallen into a cold war.

Last December, Stanley was photographed shopping glasses with Regen in Causeway Bay. In February, the pair were spotted going to a nightclub together. Stanley also drove Regen home, and the two were seen hugging intimately in front of Regen’s house.

However, Stanley was not the only one who was two-timing in this cheating scandal. When Stanley and Regen were seeing each other, Regen was dating singer Esta Shum (沈瞳伽). Regen and Esta went to Thailand together after Regen completed her work in Wudang Rules, but the pair later broke up after Regen accused Esta of domestic violence. According to sources, Esta got violent after he discovered that Regen had cheated on him with Stanley.

In an interview held in May 2015, Regen admitted that she had broken up with Esta. She also admitted to dating Stanley for three months, but they have since broken up.