Last summer, mainland Chinese drama Go Go Squid! <亲爱的，热爱的> made a lasting impression on audiences with the explosive chemistry between the main leads, Li Xian (李現) and Yang Zi (also known as Andy Yang 楊紫). Although fans expected to see more of their romantic scenes in the sequel, Dt. Appledog’s Time <亲爱的，挚爱的>, it was announced that the drama would instead focus on on the love story between Go Go Squid‘s supporting characters, Wu Bai and AppleDog, played by Hu Yitian (胡一天) and Li Yitong (李一桐). Despite viewers’ approval, they still want to know how everything unfolded for Yang Zi and Li Xian’s characters. Hence, fans are thrilled about the stars’ cameos in the series. 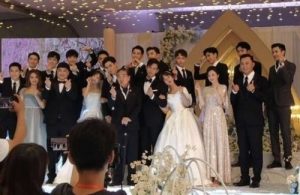 Previously, fans couldn’t contain their excitement when photos of Li Xian on the set of Dt. AppleDog’s Time came to light. However, the latest picture roused fans even more. In the still, Yang Zi wore a wedding dress while smiling and leaning her head on Li Xian’s shoulder. It appeared to be a double wedding scene, as Yitian and Yitong also wore wedding outfits in the group picture. Many fans were thrilled to see the main characters from the first and second seasons all in one frame.

Aside from making a cameo appearance for the sequel and showing their support for the series’ anticipated success, Yang Zi and Li Xian have also been busy with other film projects. Since starring in Go Go Squid!, they surged in popularity and became one of the many sought-after actors. While some actors choose to appear on as many variety shows as possible as they ride out their wave of popularity, Yang Zi and Li Xian decided to focus on developing their acting careers by taking on more dramas.

Currently, fans are awaiting the broadcasts of Yang Zi’s two highly anticipated dramas The Oath of Love <余生请多指教> and The Golden Hairpin <青簪行>. Meanwhile, Li Xian is still in the middle of filming pre-modern Republican era drama A Love Never Lost <人生若如初见>. Since he shaved his head to play this role, he had to wear a wig for his cameo appearance in Dt. AppleDog’s Time.