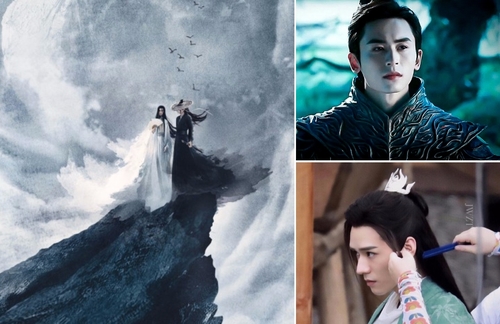 The success of past Boys Love (BL) dramas, such as The Untamed <陈情令> and Guardian <镇魂>, has prompted the rise of more drama adaptations of BL novels. The latest upcoming historical BL dramas include Immortality <皓衣行> and Word of Honor <山河令>. The latter stars popular Chinese actors Zhang Zhehan (张哲瀚) and Simon Gong Jun (龚俊). Although fans of the novel Faraway Wanderers <天涯客> initially disapproved of the casting choices, the recent stills and fan-taken photos of the attractive cast are making hearts flutter.

Word of Honor follows the story of Zhou Zishu (Zhang Zhehan), the former leader of a special elite group that’s loyal to the emperor, who leaves his traumatizing past behind in search of a peaceful life. However, his dreams of such peace shatter when he crosses paths with the master of the Ghost Pavilion, Wen Kexing (Gong Jun). 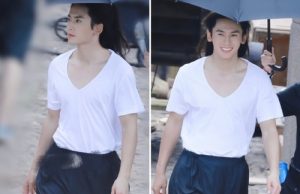 Zhehan appeared to be in good spirits on set, as he was all smiles during his break. Despite wearing a white undershirt, his fixed long hairstyle and makeup still managed to radiate an elegant and graceful aura of the historical times. Meanwhile, Simon also appears to be having a good time immersing in his role. Photos of him in a completely white costume and a green robe drew great attention, as fans found it complemented his attractive visuals and fair skin.

Another photo with both Zhehan and Simon lying on the grass also excited fans who fervently praised their side profiles. Some also expressed that the actors look like a matching couple. Heated discussions online also reveal that many fans are looking forward to seeing their electrifying bromance. 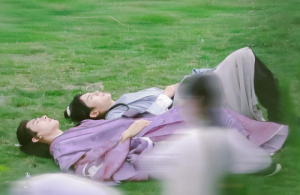 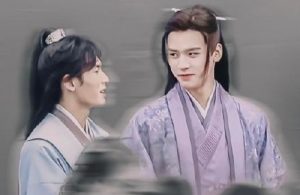