Hit by pro-Japanese accusations, actor Zhang Zhehan’s (张哲瀚) career is on a downward spiral. On August 15, the China Association of Performing Arts admonished Zhang Zhehan’s misbehavior of visiting Yasukuni Shrine and paying tribute to Japanese war criminals, calling on the industry to boycott him due to his challenging the national Chinese dignity.

Chinese social media and streaming platforms quickly followed by blocking Zhang Zhehan. His personal and work studio’s Weibo accounts, which had over 18 million followers, were both deleted for a “violation of community guidelines.” His fan club and supertopic pages on Weibo were also removed. In addition, music streaming platforms have eliminated all of Zhang Zhehan’s songs.

All the brands and productions that are associated with the actor have announced the end of their partnerships.

Prior to this development, the actor’s fans shared that he intended to post an apology video on August 15, and fly to Shenyang for work after that. However, given how fast the industry has acted to block him, it remains to be seen if Zhang Zhehan will take further public actions.

Dramas and films starring Zhang Zhehan, including this year’s sleeper hit, Word of Honor <山河令>, have removed him from the cast list. Some speculate that Word of Honor, Demon Girl <半妖傾城> and The Blooms at Ruyi Pavilion <如意芳霏>, may eventually be removed from streaming platforms entirely due to the fallen star’s controversy.

Zhang Zhehan has four films and dramas on hand and starred as first male lead in two of them – Yu Zheng’s (于正) costume drama Zhaoge <夢迴朝歌> and modern romcom Fall in Love at Second Sight <一見不傾心>, both of which wrapped up filming in 2017 and were awaiting broadcast.

Not to forget reality program Final Winner <最後的贏家> which is currently in the post-production phase, as well as four upcoming shows which have yet to officially announce casting details.

Ironically, Zhang Zhehan plays a policeman in two productions awaiting broadcast, including Formed Police Unit <維和防暴隊> which had been completed in May and was due for release in 2022. The film centers on the Chinese riot team’s overseas mission and is helmed by famed wushu director Tat Chiu Lee (李达超), with a cast including Wang Yibo (王一博), Elane Zhong Chuxi (鍾楚曦) and Gu Jiacheng (谷嘉誠). Already in the post-production phase, the production company announced it will delete all of Zhang Zhehan’s scenes in the movie.

Retro Detective <复古神探>, a Youku detective drama in which he plays an undercover cop, was originally scheduled to air this year, but will now likely remain shelved.

A graduate of Shanghai Theater Academy, Zhang Zhehan is currently the juridical person of his own studio, an individual proprietorship set up in November 2019.

He is also signed onto Beijing Pulin Production Co, Ltd in 2019, a company with majority shares owned by Vicki Zhao Wei (赵薇) and her mother, Wei Qiying (魏启颖).  In March this year, Zhao Wei chatted on a live stream about signing on Zhang Zhehan as she was “attracted to his aura of melancholy.” It remains to be seen if Zhao Wei will comment on Zhang Zhehan’s controversy through her studio. 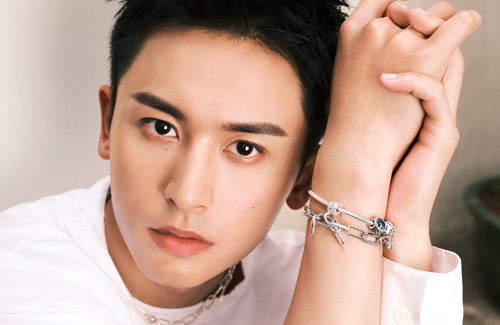