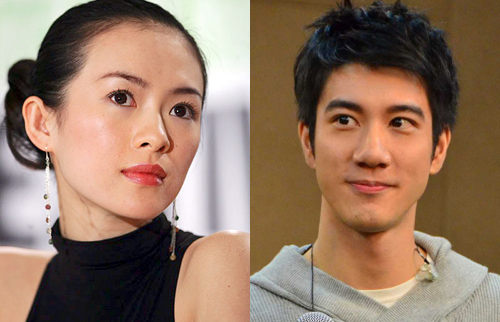 A high-spirited Zhang Ziyi (章子怡) was filming her new romantic comedy, My Lucky Star <非常幸运>, on July 31st in Inner Port Shelter, a harbor near Sai Kung Town in Hong Kong. Taiwanese singer-actor, Leehom Wang(王力宏) was also spotted filming alongside Ziyi. The script for My Lucky Star is under tight wraps, in which there is no word on the role Leehom Wang is playing.

The plot to My Lucky Star also remains a mystery, but sources say that the movie will be the sister production to the highly successful, Sophie’s Revenge <非常完美>, in which Zhang Ziy debuted as the film’s producer.

Tight security accompanied the filming of My Lucky Star. Besides occupying almost the entire harbor, crew members also guarded the perimeters – including renting junks to survey the bay and putting posts on the rooftops of nearby apartments – for the lookout of the paparazzi or prohibited personnel.

The actress-turned-filmmaker has recently been linked with mainland Chinese television producer, Sa Beining (撒贝宁), since splitting up with her billionaire boyfriend, Vivi Nevo, in late 2010. Tabloids first caught Beining visiting Ziyi on the film set of The Grandmasters <一代宗师> in Guangzhou last year, and then spotted holding hands while vacationing in Huangshan, China. Beining also arranged Ziyi to appear in a popular CCTV variety show for the London 2012 Olympics during prime time.

On the set of set of My Lucky Star in Sai Kung, Ziyi was seen wearing the same white sandals, in which Beining had the same set. She stepped out of her minivan looking noticeably brighter and more full-figured. It is of no surprise that the actress was previously rumored to have been pregnant with Beining’s child.

Although the rumored couple has been caught spending time together on many occasions, neither Ziyi nor Beining publicly declared their alleged romance. Ziyi’s manager, however, denied to comment on Ziyi’s personal life, but did not deny the possibility of a new romance.

Yesterday, Ziyi and Leehom returned to the harbor to film a new scene of My Lucky Star. Due to the hot and humid weather, Leehom immediately unbuttoned his shirt after completing a shot, revealing his toned torso. Ziyi did not give into the temptation, and walked off with her assistant, affirming her relationship status with Beining.

Known as the “Pearl of the East,” Hong Kong’s unique harbor scenery has attracted many overseas location scouters to have their movies filmed in the city.

The second of Christopher Nolan’s critically acclaimed Batman trilogy, The Dark Knight, filmed at various locations in the Central business district in Hong Kong in November 2007. A major action sequence involving the Batman flying off of the International Finance Centre, the tallest building in Hong Kong, made it into the final cut in the film.