(Above) “Who Rules the World” pulled in the viewers but also faced controversy.

Airing to good reviews, actress Zhao Lusi (趙露思) and Leo Wu‘s (吳磊) costume drama Love Like the Galaxy Parts I and II <星漢燦爛·月升滄海> has scored positive comments for the leads’ swoon-worthy romance and great story. However, the same cannot be said for the actress’s other drama Who Rules the World <且試天下>, where her pairing with Yang Yang (楊洋) was lambasted for lacking chemistry.

Despite surpassing an impressive 3.6 billion in viewership, the series has been riddled with controversy, from how Yang Yang and Zhao Lusi wore a fake two-piece period costume and 20cm-thick soled shoes respectively on set, to allegations of horse abuse and even plagiarizing off 2019 drama Royal Nirvana <鶴唳華亭>.

Viewers also took issue with certain plot details such as how female lead used her body to block two big cannons, and that both leads did not perform up to standard in the drama. With sentiments that their chemistry felt contrived, fans reflected that instead of bringing something refreshing to the story, the duo’s pairing did each other more harm than good.

Rumored to Be Cast in Remake of Well-loved Wuxia Classic
Thus, talk that Yang Yang and Zhao Lusi will be pairing up in an adaptation of renowned Chinese novelist Louis Cha‘s (金庸) classic Sword Stained with Royal Blood <碧血劍> was met with lukewarm reactions. There is ongoing talk that Yang Yang would be starring as the righteous and loyal disciple of the Huashan Sect Yuan Chengzhi, and Zhao Lusi as the beautiful and capricious maiden Qingqing.

While supportive fans felt that the stars’ second collaboration would give them an edge in portraying the classic characters, others pointed to the “failure” of Who Rules the World and called on the two not to “ruin the classic” as their acting chops were not up to par. Some even requested Zhao Lusi to stick to the tried-and-tested onscreen pairing with Leo Wu, as Yang Yang and her lacked compatibility. 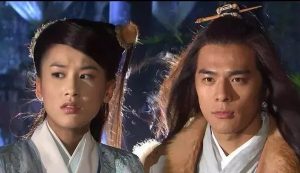