“Beauty at War” is Too Confusing 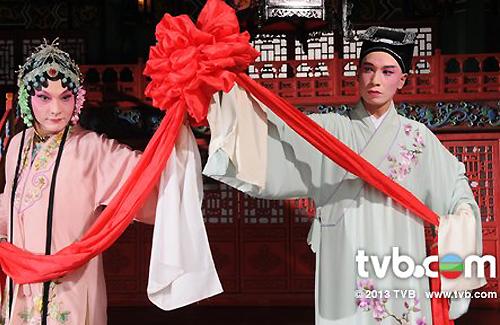 Above: Eddie Kwan and Moses Chan as opera singers in “Beauty at War”.

Beauty at War <金枝慾孽貳>, the highly anticipated sequel to 2004’s TVB blockbuster hit War and Beauty <金枝慾孽>, finally premiered on April 22, 2013 on TVB Jade. The 30-episode sequel stars Sheren Tang (鄧萃雯) reprising her role as Consort Yu, who is a victim of gossip and rumors created by her younger sister, Consort Dowager Shun (Christine Ng 伍詠薇). It was these harmful rumors that created the story of War and Beauty, which had presented Consort Yu to be a ruthless leader.

The critically acclaimed War and Beauty was 2004’s drama of the year and was a key contributor to the popularity of palace-scheming dramas in the Chinese television industry. War and Beauty ended with high ratings and revived the careers of Gigi Lai (黎姿) and Sheren Tang. The Qing dynasty series also carried the epithet, “legendary drama”, while producer Jonathan Chik (戚其義) and scriptwriter Chow Yuk Ming (旭明) were called the “legendary duo”.

However, Beauty at War may not reach the same “legendary” recognition as its predecessor.

The general consensus of opinion on the first episode of Beauty at War, which aired on April 22, was “confusing, with too many side characters being introduced at once.” The first episode opened with a late Qing dynasty government official kneeling in front of the Hall of Supreme Harmony at the Forbidden City. Puyi – Qing China’s last emperor in history – confronts the hopeful official and firmly tells him that the Qing Dynasty’s imperial power is over.

The scene then does a confusing time jump to 100 years back to the past, during the reign of Emperor Jiaqing. The Kunqu troupe leader, Cheung Kuk Sang (Du Yange 杜燕歌), tells a story to a chamber-full of men on how Consort Yu forced a palace maid to marry a eunuch. This rumor is a reference to an episode of War and Beauty, in which the palace maid On Sin (Maggie Cheung Ho Yee 張可頤) was forced to marry a eunuch.

A separate story arc involving Ada Choi’s (蔡少芬) Sheung Lin and Tracy Ip’s (葉翠翠) Shu Lan, was also introduced in the first episode. Tracy was criticized for her dull acting and netizens noted that Tracy recited her script like she was reading a book. Someone commented, “[Tracy] drags down the whole show.”

The second episode, which aired the following day, garnered quite the opposite reaction from viewers. Instead of being bustled with character introductions, the second episode was criticized for its slow pace and its overemphasis of kunqu. A netizen expressed, “I don’t know if the housewives will have patience for this.”

The episode introduced Alice Chan (陳煒) as kunqu hua dan, Kwok Yuen Ching, who is neglected by her lover, Ko Lau Fei. Almost half of the episode was dedicated to the kunqu performances of Alice and Moses, and many netizens admitted that the performance, though strategically filmed, was boring to watch.

However, some were still quite supportive of the episode, expressing, “Actually, I did not even bother to listen to what they were singing in [the kunqu scene]. If you are not familiar with kunqu, you wouldn’t have understood it anyway. [What I was] more interested in was their acting and their eyes. Did anyone see how sad Alice’s eyes looked? The way how she and Moses looked at each when they were performing? Awesome scene.”

99 comments to “Beauty at War” is Too Confusing