Cast Promotes “Eye in the Sky” 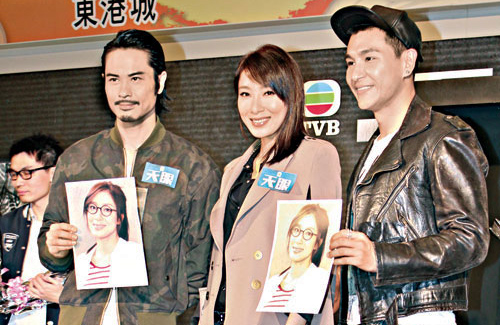 Kevin indicated that the 20-episode drama will have an extremely exciting ending. “The audience is sharp, so we have to produce high quality work to keep them.” When asked whether he has high hopes for ratings, Kevin said, “It’s different now than when I first debuted. The Internet has created many different avenues for people to access entertainment. Even my mom knows how to use the Internet!”

Lin Xia Wei, who has been praised for her acting in the drama, is happy to gain recognition for her hard work. Since her debut, Lin Xia Wei has been more popularly known as Raymond Lam’s (林峯) cousin rather than an actress in her own right. Lin Xia Wei said, “I’m really happy and touched that my work is gaining recognition, but I didn’t cry. I don’t usually think too much [about rewards]. What’s most important is the process.”

Asked whether Raymond has been watching her drama or whether he has been too occupied with his girlfriend, Kareng Ng (吳千語), Lin Xia Wei said, “We’ve always kept in contact. Why would he not care about me? Usually when he sees it, he will call me, but he hasn’t lately. He previously said that when he watched his old drama, he thought [his acting] was awkward, but he doesn’t have that feeling when he watches me onscreen.”

Tavia Did Not Celebrate White Day

As March 14 was White Day, Tavia was asked how she spent the holiday. “Was it White Day? I had no idea! I didn’t even pay attention to Valentine’s Day. I only remember my mom’s birthday and other big holidays.” When asked whether she has been watching her boyfriend Him Law’s (羅仲謙) drama, Young Charioteers <衝線>, Tavia said, “I watched the beginning parts. I heard the ratings were doing okay.”

85 comments to Cast Promotes “Eye in the Sky”