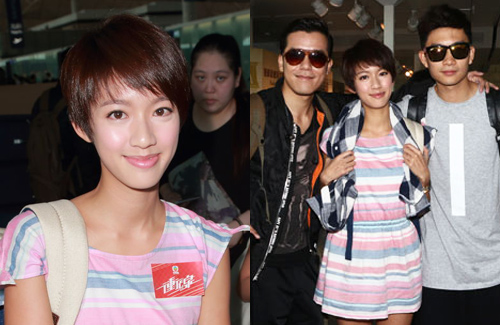 The scenes in Hong Kong have already completed filming and the cast and crew popped champagne bottles to celebrate. However, Him revealed that more hard work is ahead in Taiwan. “On September 19, we have to film over 100 scenes!”

Taking the female lead for the first time, Sisley worked extra hard to prepare for her role. Unfortunately, she recently fell ill with a cold. Stopping to speak with the press at the airport before departing for her flight, Sisley said, “I’m a little sick. I’m scared of losing my voice. I had a day off yesterday and that’s when I got sick. I haven’t had time [to see the doctor], but I brought some cold medication along with me.” She hopes that she will have time to enjoy the local sights and have fun while filming in Taiwan.

Although Sisley was reported to be boldly flirting and pursuing Him Law on the set, she did not take the rumors to heart. After the negative reports arose, many of Sisley’s coworkers, including Him, offered comfort and kind words to cheer her up.

Flying to Taiwan to film for a cycling competition in Cross the Finish Line, Sammy expressed that he feels slightly worried for the upcoming scene despite practicing for a week on his bike. Having fractured his hand while filming a bicycle scene in Line Walker <使徒行者>, Sammy said he will need to be more careful this time. Once he checks in the hotel, Sammy will make sure to get adequate rest prior to filming.

Asked to comment on Anthony Wong’s (黃秋生) outrage over TVB’s travel policy for artistes when filming outside of Hong Kong, Sammy said, “I feel that we need to give Anthony special treatment because it takes a lot of money to hire him, so we need to treat him with special care.”

27 comments to “Cross the Finish Line” Cast Leaves for Taiwan