Grace Chan Leads a New Generation in “Raising the Bar” 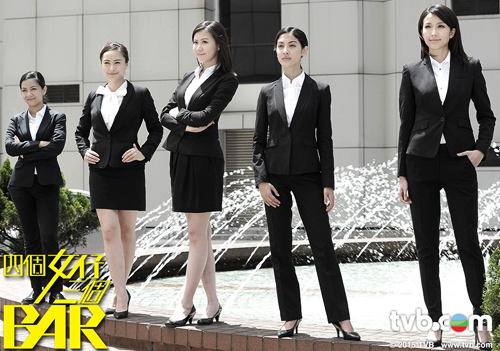 The 25-episode drama is produced by Joe Chan (陳維冠), who is known for casting new stars.

Grace, who only debuted last year, said she is honored to be able to work so closely with seniors Louis and Ben.“They have a lot of weight [in their acting]. They taught me how to understand the dialogue and train my emotions. I really learned a lot.”

Grace disclosed that her character has a troubled past, which makes it one of her most challenging roles to portray thus far. Grace described her character to be someone who is introverted, traditional, but hardworking. However, she still insists to become a barrister. “I really like her character. She’s a great example to show others that one can always fill in the flaws of life.”

On portraying the role, Jeannie said, “Because of our characters’ different personalities, scenes [with Stephanie] were actually more comfortable to film. Besides, most of our scenes are meant to be funny, so I hope the audience will enjoy them.” Jeannie’s role will undergo a dramatic change—from being an inexperienced student to a mature and professional barrister.

Raising the Bar is not Jeannie’s first time working with producer Joe Chan. Asked if she got special treatment during filming, Jeannie laughed and said, “He actually spent more time taking care of the others. If he kept an eye on me, I’d actually be more nervous.”

While Grace, Jeannie, and Stephanie have had previous acting experience, Raising the Bar is Moon Lau’s debut drama. Joe Chan said he cast Moon due to her calm appearance and experience in hosting television programs.

Natalie Tong (唐詩詠) explained that her role, Ashley, is one of her most mature roles to-date. Natalie will have an ambiguous romance with Timothy Cheng (鄭子誠), who portrays her teacher.

“It’s a rather difficult role,” said Natalie. “I really want to thank the producer for giving me this opportunity. This is my first time playing such a mature role. [The producer] even told me not to smile as much because that will expose the youthful, naïve side of myself.”

To get a better grasp of her role, Natalie sought the help of one of her lawyer friends. “For a few months I followed barrister Osmond Lam (林國輝) and learned a lot about law and what it felt like to be a lawyer. I’m thankful of his support.”

Natalie’s relationship with Timony in the drama was also a big challenge for her. “Timothy is a really good costar. We share a very mature romance in the drama. Our characters go through a lot together, but we also had very little screentime to depict that. It’s a challenge.”