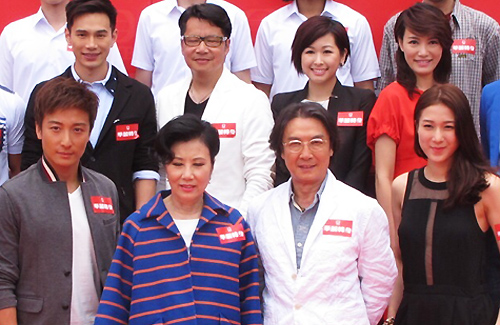 Liza Wang (汪明荃) is well known for her perfectionist work ethic and no-nonsense attitude. Working in the TV industry for over 40 years, she has earned both respect and fear from her junior colleagues. Often labeled as a diva, Liza will soon bring her intimidating public persona on-screen in new series Elegant Transformation <華麗轉身> as a veteran superstar who belittles all those around her.

To emphasize her character’s glamorous status, TVB has commissioned stunning outfits designed especially for Liza. The company also made plans to film portions of the series overseas, investing a big sum to ensure that the production lives up to its name. The drama also stars Damian Lau (劉松仁), Linda Chung (鍾嘉欣), and Alex Fong (方力申).

Working with such a renowned actress, Alex admits that he is nervous about the unwritten rules. At the drama’s blessing ceremony on June 3, he explained, “I’m nervous. Others warned me that I must not show up late, and should even come in early because I would be considered late if I arrive after Ah Jeh [Liza]”.

Unfazed, Liza joked that she will have to ditch her punctuality in order to ease the tension on set. “I don’t want to irritate others so I don’t dare to arrive early nowadays. In fact I will come very late so that everyone can enjoy a more relaxing filming experience.”

Linda, who plays Liza’s personal assistant in the series, described her character as someone who is often bullied by her boss. She will also have her heart broken by Alex, a wealthy heir and a finance genius. Dressed to play the part, Linda reveals that she will film in various fashionable costumes. “This time I will wear very fashionable and trendy clothes. Since there are many outfits, we have to be very careful about continuity or viewers will point out all the mistakes.”