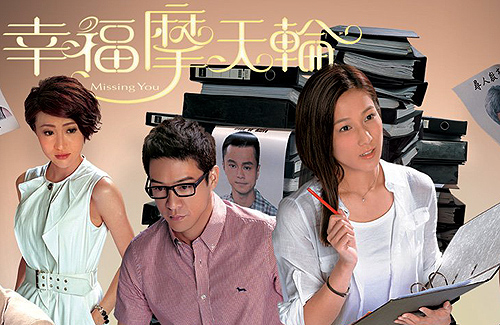 Linda Chung’s (鍾嘉欣) latest drama, Missing You <幸福摩天輪> is off to a rocky start, receiving lukewarm responses and a rating of 26 points on its debut week, as reported by CSM Media Research. This equates to less than 1.7 live million viewers per episode in Hong Kong.

Missing You dropped another point in its second week, attracting approximately 1.6 million live viewers per episode.

Netizens pointed out that the reason for Missing You’s slumping ratings is because of the drama’s weak cast. Besides Linda Chung, none of the main cast is well-known. Lead actor and actress, Jason Chan (陳智燊) and Lin Xiawei (林夏薇), are still relatively new actors in the industry. Although supporting actor, Calvin Chan (陳偉洪) has appeared in numerous television dramas since his debut in 2010, his role as “Gayson” in Missing You is his first  and only meaty role.

It was also reported that because of the weak cast, Missing You’s producer decided to get more popular actors, such as Raymond Wong (黃浩然) and Elliot Yue (岳華), to guest star in a few episodes, hoping to push up the drama’s ratings performance.

However, Missing You is not the only TVB drama to suffer poor ratings in recent weeks. Legal drama, Friendly Fire <法網狙擊>, is also going through a stoop in ratings performance.

Friendly Fire premiered the same week as Missing You, drawing in an average of over 1.85 million live viewers, with 29 rating points. However, as it entered its second week of broadcast, Friendly Fire dropped 2 points, raking in 1.72 million viewers.  Friendly Fire received one complaint about the drama’s overuse of Japanese music and ridiculous story line.

Both Missing You and Friendly Fire had the misfortune to be broadcast during Christmas week, which may be a cause of their poor performances. Many of TVB’s other programs also suffered a ratings decrease. Hong Kong’s other free station, ATV, received a rating of zero point in most of their broadcast shows, as usual.

TVB announced that in the next five years, the company would measure their audience viewership through the Nielsen Media Research rather than CSM. According to TVB, the American-based Nielsen ratings are able to provide a more accurate measurement of viewership count.

88 comments to “Missing You” and “Friendly Fire” Suffer Low Ratings