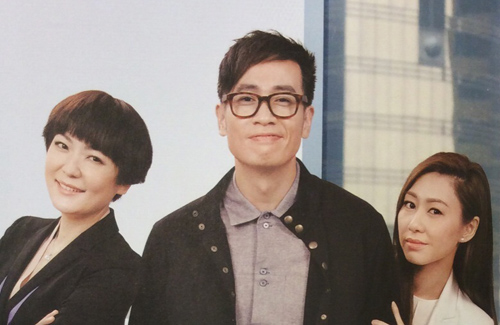 The cast of TVB’s supernatural comedy Ghost of Relativity <鬼同你OT> including Moses Chan (陳豪), Nancy Wu (胡定欣), and Ram Chiang (蔣志光), were filming in Mongkok yesterday. As it was around lunchtime, the cast was surrounded by onlookers while filming.

After shooting for several hours, the cast took a break for lunch. While Ram Chiang napped, the rest of the cast ate boxed lunches together. Not minding the staring and pointing, Moses went to a McDonald’s across the street to buy coffee. The cast and crew joked that Moses is never without his coffee. Moses responded with a laugh, “I need to enjoy a cup of coffee after a meal!”

Lead actress Kristal Tin (田蕊妮), who was not present at the Mongkok shoot, revealed that filming for Ghost of Relativity had been extremely enjoyable, as the cast often joked on the set to the point where they frequently committed outtakes.

Ghost of Relativity is a romantic comedy starring Nancy as a ghost, who enters Kristal’s body so she can get closer to Moses. The comedy also touches on office politics and the struggles of working overtime but earning little compensation in return.