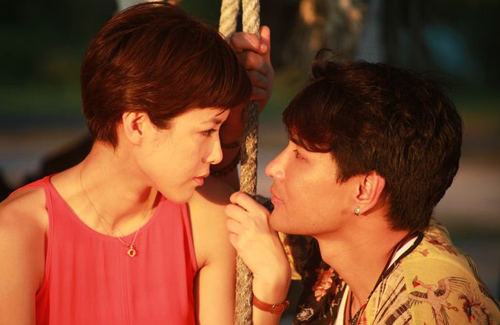 Outbound Love stars Ruco Chan (陳展鵬), Aimee Chan (陳茵媺), Lin Xiawei (林夏薇) and Tony Hung (洪永城), in a romance that features a cast from both Hong Kong and Malaysia. It premiered in Hong Kong on January 20, 2014, but due to the series’ clash with the Lunar New Year holidays, Outbound Love drew in low average viewership ratings. In its second week of broadcast, average ratings dipped to 24 points.

Yesterday, Aimee uploaded her Weibo with a post thanking viewers for their support of Outbound Love. She wrote, “I’m so happy! I’ve received news that the final episode of Outbound Love had an average of 32 points and a peak of 35 points. Thank you to all the viewers, the producer, as well as the production crew from Malaysia and Hong Kong. Thank you to all my brothers and sisters for giving me such lovely memories! Shik Shik [Aimee’s character] journey in Malaysia has ended… hope there will be a sequel! Haha! P.S. I miss the sunshine!” Currently resting, Aimee will resume filming TVB dramas in the latter half of the year.

The main cast of Outbound Love also thanked viewers and the production crew in their respective Weibo blogs for their efforts on the show. In the meantime, main lead Ruco Chan is busy filming period drama The Apothecary <大藥坊>. Tony Hung is currently shooting Time for Marriage <男大當婚>.