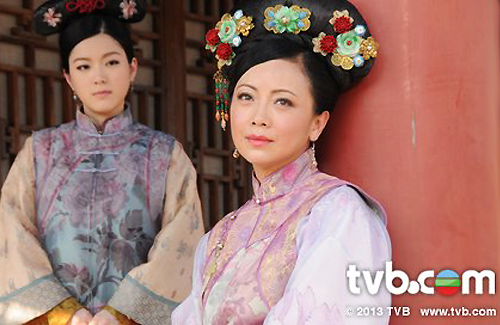 After a long wait of 9 years, producer Jonathan Chik (戚其義) and script editor Chow Yuk Ming (周旭明) finally created the sequel to popular classic, War and Beauty <金枝慾孽>. The second installment, Beauty at War <金枝慾孽 (貳)>, will premiere on Monday, April 22. Ada Choi (蔡少芬), Christine Ng (伍詠薇), and Eddie Kwan (關禮傑) are the new additions to the cast. Will the palace drama will viewers’ hearts without the majority of its original characters?

Producer Chik revealed, “A lot of people expect more palace schemes, but this sequel will revolve around the concept of right and wrong, gossip, and sympathy. The story is not difficult to grasp. There was a lot of scheming and fighting in the original series, and many people died in the end. This time, I can tell the audience that there won’t be many deaths. The taste is not as heavy.”

Sheren Tang (鄧萃雯) is the only cast member to reprise the same role from the original drama – the memorable Yu Yuet. Although Moses Chan (陳豪) was also part of the original cast, he will reappear as an opera artist named Ko Lau Fei, who enters the palace to perform.

The connection between the two installments lies between Sheren and Christine’s characters. Christine will portray Yu Yuet’s younger sister, Yuen Sau. They entered the palace during the same year, but Yu Yuet later became ill and Yuen Sau carried on to gain the emperor’s favor by herself. She won the emperor’s heart, but was unfortunately left as a widow when he passed away soon after.

Yuen Sau remained in the palace with bitterness, while Yu Yuet became the new emperor’s favorite concubine. Yuen Sau believes that her sister had pretended to fall sick that year, shoving her at the dying emperor. With hatred in her heart, Yuen Sau consistently tries to defame Yu Yuet in the palace.

In the original series, all the rumors regarding Yu Yuet was actually just an illusion through parallel time and space, and was made up by Yuen Sau. Only in Beauty at War can the audience see the true version of Yu Yuet. As a result, there is a big difference in Sheren’s portrayal of her character.

Ada Choi and Sheren Tang’s Characters Are Not Lesbians

As the nanny of Yu Yuet’s daughter, Ada’s Sheung Ling will use information she obtains within the palace for profitable gains. Contrary to earlier intentions, Ada and Sheren will not have a lesbian relationship in the drama. Producer Chik expressed, “We did think of filming a lesbian scene, but decided not to in the end. In the drama, both Sheren and Ada fall in love with Moses. However, it isn’t the typical kind of a triangle relationship. Ada and Sheren confide in and depend on each other. It’s a type of care, not love. There is space for it to turn into love though, so it’s a little contradictory. Christine will also have feelings for Moses. The plot isn’t typical, so everyone should just watch.”

Producer Chik further revealed that there are chances of seeing Gigi Lai (黎姿) and Charmaine Sheh’s (佘詩曼) characters in the sequel. Different editing methods were used to to make these scenes memorable. For instance, in one episode, Gigi’s voice may be heard. There will also be flashbacks to the first installment. In some situations, the audience will be able to see the characters Yuk Ying (Gigi) and Yi Shun (Charmaine) again.