Roger Kwok Embraces Evil Role in “The Good and the Bad” 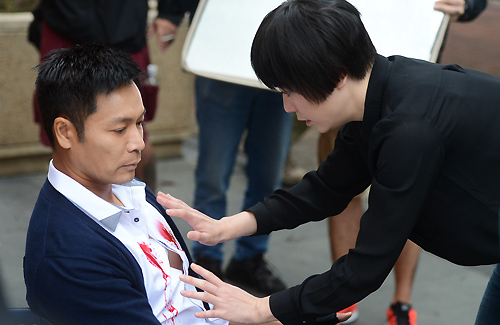 Roger Kwok (郭晉安) has proudly declared that his character in upcoming thriller The Good and the Bad <忠奸人> can be considered an “upgrade”, and sees it as his most evil portrayal yet.

Although mostly known for his righteous and happy-go-lucky roles, Roger has always wanted to play the bad guy. Due to the popularity of the character Ah Wong in TVB’s Square Pegs <戇夫成龍>, many thought Roger would be forever typecast and unlikely to be convincing in any other capacity.

Roger has definitely proved them wrong. His memorable performance in 2008’s Last One Standing <與敵同行> defied any preconceptions and showcased his ability to transform into the perfect villain. His realistic portrayal even caused viewers to scold him on the streets. Even though fans are happy to see Roger as an antagonist, TVB was hesitant to deviate from its proven formula and continued to restrict him to lighthearted dramas and comedies.

Luckily, he is finally given a chance this year to challenge another evil role. As a maimed lawyer in The Good and the Bad, Roger must communicate his character’s thoughts and secrets while bound to a wheelchair. To ensure an accurate portrayal, Roger had taken up wheelchair lessons to study proper maneuvers.

On November 13, Roger and co-star Kristal Tin (田蕊妮) were on set to film one of the final scenes for the series. In the scene, Roger was being hunted by hired guns. An anxious Kristal chased after him, only to find him slumped in his wheelchair, his shirt drenched in blood.

To keep the ending a mystery, the production crew was careful not to reveal Roger’s fate in front of curious public eyes. Although there is yet a firm release date, The Good and the Bad was recently shown as a part of TVB’s 2014 Sales Presentation and is likely to air sometime next year.

TAGS: Kristal Tin, Roger Kwok, The Good and the Bad