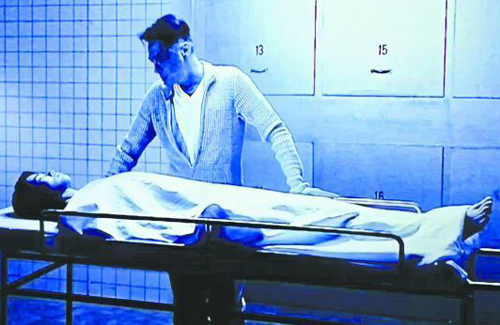 Entering its fifth week of broadcast, TVB’s 43-episode Triumph in the Skies 2 <衝上雲霄2> has finally hit the halfway mark. In the past four weeks, Chilam Cheung’s (張智霖) playful portrayal of the witty pilot Jayden Cool won many viewers, but starting this week, Francis Ng’s (吳鎮宇) Captain Sam Tong will finally have his time to shine, showing off his acting king abilities!

In the beginning of Triumph in the Skies 2, the viewers learn that Sam’s wife Zoe (Myolie Wu 胡杏兒), whom he married in the first series, had died from chronic heart disease. Sam resigns his position as head pilot in Hong Kong and moves to England, where he lives a calm life and quietly mourns for his beloved. Sam’s family and friends convince him to return to Hong Kong to fly, and believing that he has truly let go of his past, he joins Skylette Airlines.

In the past twenty episodes, Sam was convinced that the burden in his heart was relieved, but in an upcoming episode, we learn that Sam has never really let go of Zoe. Like Flora Chan’s (陳慧珊) Belle in the original series ten years ago, Sam does something we rarely see him do – he cries.

When Sam was ordered to lead a flight to Kaohsiung, Taiwan, he immediately turns down the job. Jayden complains about the special treatment Sam has been receiving from superiors, and in the end, Sam has no choice but to fly. Due to engine repair, Sam is forced to stay in Kaohsiung overnight.

Holiday (Fala Chen 陳法拉), Sam’s roommate and pilot cadet, notices Sam’s odd behavior and confronts him. After coming across the same hospital where Zoe passed away years ago, Sam breaks down in front of Holiday.

In his state of distress, Sam imagines seeing Zoe for the last time, holding her hand before she bids her last goodbye to him at the Kaohsuing International Airport. When Sam lets go of her hand, the knot in his heart is also untied.

Meanwhile, Sam’s younger brother Isaac (Ron Ng 吳卓羲) flies to Paris, France to spend a few days with his buddy Roy (Kenneth Ma 馬國明), who is heartbroken after breaking up with his two girlfriends. Isaac’s good friend and Zoe’s doppelganger, Summer Ha, also flies to Paris to spend time with him.

Though Isaac and Summer have feelings for each other, Isaac believes that his brother will not approve of the relationship, and avoids forming close bonds with her. Realizing that Isaac is not in love with her, Zoe match-makes Isaac with good friend Josie Kiu (Kelly Fu 傅嘉莉), who has had a crush on Isaac.

Holiday Breaks Up with Jayden

After their France getaway, Holiday and Jayden begin dating. However, Holiday discovers that not only is she not jealous of Jayden’s popularity with the girls, she also never truly loved Jayden. When Sam confessed his feelings about Zoe to Holiday, she comes to realize that she too has never let go of her deceased boyfriend, Daniel. She then returns to Hong Kong and breaks up with Jayden.

37 comments to “Triumph in the Skies 2” Upcoming Spoilers: Sam’s Tearful Farewell to Zoe