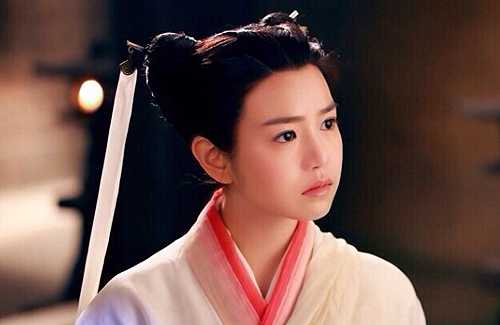 Though Taiwanese actress Michelle Chen (陳妍希) has faced a countless barrage of criticism since she was cast as the Little Dragon Girl in The Romance of the Condor Heroes <神鵰俠侶>, producer-screenwriter Yu Zheng (于正) has openly defended his casting decision from the start. One day before the drama’s premiere, Yu Zheng posted online to express his ongoing support for Michelle.

When Michelle was announced as the Little Dragon Girl last year, many netizens criticized her for lacking the physical qualities necessary to portray the character. In the original novel, Return of the Condor Heroes <神鵰俠侶>, Little Dragon Girl was described as having an icy demeanor. However, due to her baby face and sweet-looking features, Michelle was seen as entirely unsuitable for the role. Some netizens even labeled her “the worst Little Dragon Girl in history.”

The day before The Romance of the Condor Heroes aired on December 3, Yu Zheng posted on his blog to explain that his intention was to create a new type of Little Dragon Girl. When writing the screenplay, he struggled with how to remain faithful to the original story while simultaneously infusing the drama with a sense of novelty. In the end, he decided to rely on his own interpretation of Little Dragon Girl and subvert the widely accepted emotional coldness of the character. “If we don’t try it, how will we know if it works?” he wrote.

Yu Zheng also admitted that while Michelle may not resemble the traditional Little Dragon Girl, she was the most suitable candidate after his first choice, Angelababy, was unable to film for the series due to conflicting schedules. Moreover, as the drama’s producer and screenwriter, he felt that he bore more responsibility for the drama’s success than the actors did. “If you have any bricks or planks, aim them at me,” he stated. “I will humbly accept them!”