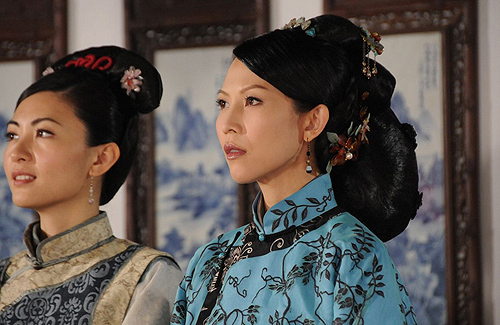 Despite its expensive production and big cast, Beauty at War <金枝慾孽貳> has become one of TVB’s most poorly rated series in the past few years. Last week, ratings continued to only average 19 points, becoming the first drama in a long time to crash below an average of 20 ratings points.

War and Beauty received a minor boost in ratings of 23 points last Tuesday. However, in last Wednesday’s episode where Ada Choi (蔡少芬) lost her three children to the plague, the ratings again plunged to 18 points. Ada’s husband tried to keep the children’s deaths from her. The numerous perplexities of whether to tell her about the deaths of her children and why she should be kept in the dark took up the whole episode, leading to disgruntlement among viewers with the slow-moving plot.

Fortunately, Ada’s outstanding performance in episode 19 helped the ratings to go up again last Thursday. In that episode, Ada displayed great acting skills when she cried from the beginning until the end of the episode. Having known that her three children have already died, Ada adeptly her grief throughout the episode. After the airing of the episode, Ada received praises from both her colleagues and netizens who said that the performance was deserving of the TV Queen title. That episode earned a rating of 20 points.

Will Not be Axed

In spite of its low ratings, it is unlikely that Beauty at War will be axed. TVB Deputy Director of External Affairs, Tsang Sing Ming (曾醒明) said, “In recent years, no drama in the prime time slots has plunged below an average of 20 points. Since Beauty at War is ending soon, it will not be cut nor will there be changes made to it. We will do our best.”