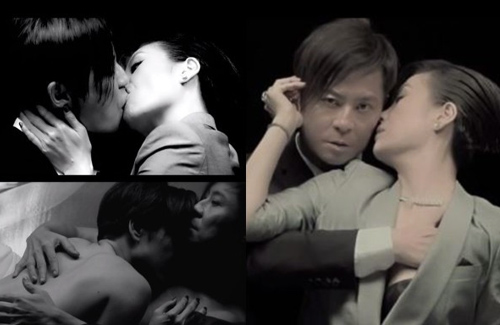 Christine Ng (伍詠薇) and Grasshopper’s Remus Choy (蔡一傑) gave bold performances in the music video for Chilam Cheung’s (張智霖) latest single, “Finding Happiness” <尋開心>. The two good friends were not awkward at all when they intimately hugged and kissed each other. Their sensual interactions grow more intense throughout the video, with Remus stripping Christine off her clothes, even to the point of touching her breasts and feeling up her legs.

“Finding Happiness” is the latest single from Chilam’s latest cover album Déjà Vu, which was released in January 2014. The single, originally performed by Bondy Chiu (趙學而), was omposed by David Chow (周初晨) with lyrics helmed by the acclaimed Albert Leung (林夕). The lyrics of “Finding Happiness” expresses the heightened emotions of a couple who are in a scandalous relationship.