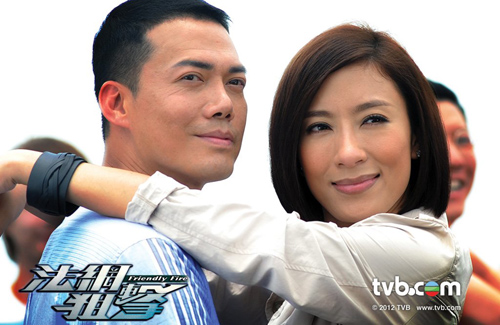 Although only four episodes of TVB drama, Friendly Fire <法網狙擊>, have been broadcast, the content in two episodes has already brought about a wave of political controversies with mainland China.

In episode 3 of Friendly Fire, one scene featured police officer, Kam Po Tei (Sammy Leung) trying to toss trash into a nearby garbage can, but missed and sent it flying onto Ai Mei San’s (Sharon Chan) face. As a policewoman, she charged him and said, “Even if it was the Chief Executive who broke the law, the punishment is the same as all commoners.” This line was interpreted as shaming Leung Chun Ying, the Chief Executive of Hong Kong, who has close ties to Beijing.

Another example happened in episode 4, where Kam Po Tei found out that Law Gai (Chung Chi Kwong 鍾志光), a dishonest agent, has been illegally changing the structures of apartment units in order to make more rooms for rent. Angrily, Kam Po Tei exclaims, “You won’t be off the hook even if you are the Chief Executive.” Again, his words seemed to shame Leung Chun Ying.

The scene in which an illegal mainland pregnant woman, Wong Fei Fei (Mandy Wong 黃智雯), is eating hot pot in a hospital room seemed to bring a real-life situation from last year onscreen. A Hong Kong mother had complained about a mainland mother for eating hot pot in a hospital room, and interestingly, the exact same thing happens in the drama. In the scene, Fei Fei exclaims, “All you Hong Kong people know are to file complaints. Not showing understanding at all.” This starts a heated argument and Fei Fei’s husband later retorts, “You Hong Kong people are of such low quality!”

Mainland netizens were deeply offended in how they were being portrayed in the drama, and stated that Friendly Fire seemed to be anti-mainland China They condemned the producer and scriptwriter and heavily demanded TVB for an apology to be made.

In a telephone interview, producer Man Wai Hung stated that the script was not aimed at shaming the Chief Executive. It only wanted to emphasize the saying of how emperors who violate the law receive the same punishment as commoners. Regarding how the drama may be prohibited to broadcast in mainland, Man Wai Hung said, “Even if that happens, I will not be disappointed. I am from a Hong Kong broadcasting company, and I want more freedom in my creativity.”