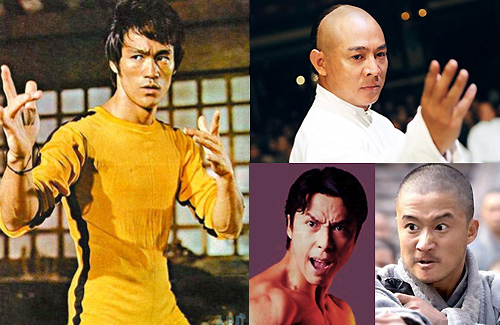 Each of these three stars also managed to develop their individual, unique styles over the years. Jackie is known for mixing his martial arts scenes with humor, a formula which he carried in his Hollywood career.

As for Jet, he is known for his technical excellence, having won the national martial arts competition in China for five consecutive years. Starring as the folk hero Wong Fei Hung in a series of films, Jet’s beautifully orchestrated fight scenes sparked off a martial arts craze.

Donnie followed in the footsteps of Jackie and Jet, and popularized the mixed martial arts style. His iconic role as Ip Man (葉問) allowed his popularity to rise exponentially internationally. Currently, Donnie commands $10 million USD for an appearance in a Hollywood film.

Following Jackie, Jet and Donnie, the other two prominent martial arts stars are Vincent Zhao (趙文卓), and Wu Jing (吳京). Having achieved some degree of success in the Chinese market, Vincent is now planning to break into Hollywood and has already embarked on training in the United States.

Despite being Jet’s junior at the same martial arts school, Wu Jing’s career started off promising, but has become stagnant.  Wu Jing acknowledged the fact and hopes to have a career breakthrough with his new 3D film,Wolf Warriors <戰狼>.

Many worry that Chinese martial arts is slowly losing its influence in pop culture, with few successors in sight. Wu Jing once expressed that today’s martial arts stars lack training and require more time and experience to truly mature.

Martial arts continue to be featured in the contemporary Chinese entertainment market, with popular films such as Rise of the Legend <黃飛鴻之英雄有夢>, which stars Eddie Peng (彭于晏). While the new generation of “martial arts” stars have a less extensive kung fu background compared to those of yesteryear, they train hard to prepare for their roles.

Furthermore, today’s film audiences no longer prefer films that solely emphasize the martial arts craft and have a preference for films that contain both thrilling action scenes and special effects. For instance, in his more recent films, Jackie often embeds humor in his action scenes. There is perhaps no need for today’s martial arts stars to focus too much on the technical craft, as long as they personify the spirit behind martial arts.

25 comments to The Evolution of Kung Fu Film Stars