The Many Criticisms of Yu Zheng’s “Swordman” 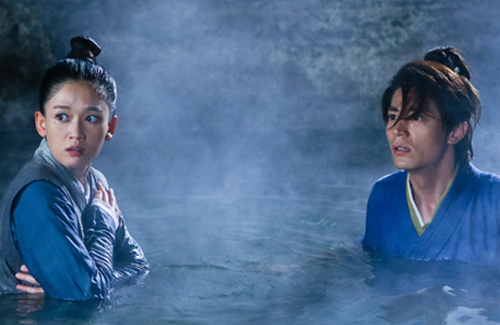 Long awaited wuxia drama, Swordman <笑傲江湖>, an adaptation of Jin Yong’s (金庸) The Smiling, Proud Wanderer by one of China’s top television producers, Yu Zheng (于正), finally made its debut on February 5. Not only did criticisms about its cast not die down, it has increased in volume over the miscast, especially that of bubbly Joe Chen (陈乔恩) as the main villain, Dongfang Bubai, as well as the subversion of the characters.

Since March last year, when news of Yu Zheng’s adaptation was reported, the online community was puzzled by his casting choice for Dongfang Bubai. Even though the villain was a castrated man who later turned feminine, the choice of the cute Joe Chen did not sit well with the public. Also, unlike the novel, Yu Zheng has included a love aspect between Linghu Chong (played by Wallace Huo 霍建华) and Dongfang Bubai, which increased the screen time of Joe Chen over female lead, Ren Yingying (Yuan Shanshan 袁姗姗). Yu Zheng explained, “We just want to include a dramatic irony in the show. Just when Yue Buqun wants to be the most formidable man in the world, Dongfang Bubai who is already one, seeks love instead.”

Yuan Shanshan said that she is not afraid of being overshadowed by Joe Chen. Believing that every role plays an important part in the drama, Shanshan feels that the screen time for Joe Chen is justified.

Shanshan herself was not spared of verbal attacks from the online community. A netizen cruelly called her the “disfigured” version of Ren Yingying. Another said she possesses “sausage lips”. Claiming to be good at self-ridicule, Shanshan said she is equally good at filtering out the bad comments.

Not only that, the revised Blue Phoenix is man-crazy. Besides having a relationship with Linghu Chong, she will always act silly and crazy whenever she comes across a handsome man. Blue Phoenix will be the character to provide much comic relief, which was originally provided by another character, Tao Gu Liu Xian. She will also be taking on the characteristics of 7 other roles from the novel in Yu Zheng’s drama adaptation.

There are also netizens who worried that the addition of the extra love scenes between Linghu Chong  and Yue Lingshan (Yang Rong 杨蓉), Ren Yingying , and Dongfang Bubai will turn the wuxia drama into a melodramatic Qiong Yao love story instead. Yu Zheng said, “There are so many fighting scenes in the series. I want to add some love elements but it’ll take up only a quarter of the whole show. So this is still mostly a wuxia drama.”

65 comments to The Many Criticisms of Yu Zheng’s “Swordman”