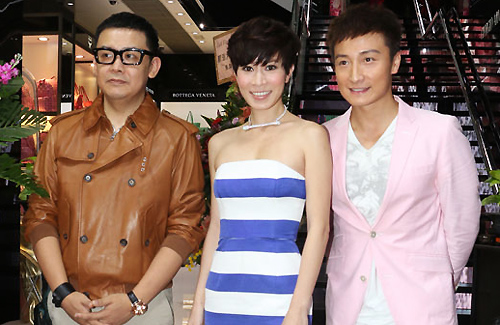 Charmaine Sheh (佘詩曼) reunites with former rumored romantic interest Chilam Cheung (張智霖) on the movie version of Return of the Cuckoo <十月初五的月光>. Since 14 years have elapsed since their past rumors, Charmaine did not feel awkward collaborating with Chilam again.

While it is said that Chilam’s wife Anita Yuen (袁詠儀) is still wary about the rumors, Charmaine does not feel uncomfortable with the filming arrangement otherwise she would not have agreed to star in the movie. Charmaine also revealed that Anita has not visited the set to observe the filming progress.

Since the production for Return of the Cuckoo started, Chilam was allegedly unhappy with the movie script and requested changes from the director. Denying that there was such an issue, Charmaine said in Chilam’s defense, “There’s no such thing. Actually, for all movies, we sit down together and discuss our opinions to see what improvements can be made. It’s pretty normal.”

Charmaine’s good friend, Janet Chow (周家蔚) recently revealed her second pregnancy during a promotional event. Since Janet already announced the news herself, Charmaine expressed her relief in not needing to keep the secret any longer. Eager to become a godmother for Janet’s second child, Charmaine praised her friend in having the determination to keep a proper diet while pregnant. Previously having met up for hot pot, Charmaine was surprised Janet did not submit to the good food.