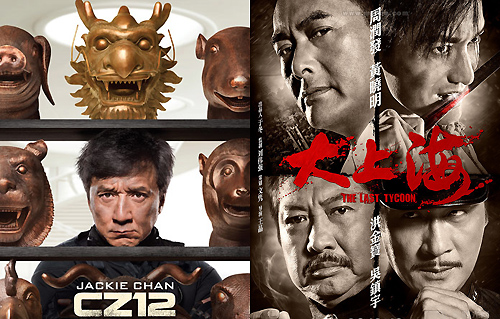 A slew of big budget films will be competing for the lucrative holiday box office in mainland China. After the less than impressive openings of  Back to 1942 <一九四二> and The Last Supper <王的盛宴> in late November, the films will soon be challenged by Jackie Chan’s  (成龍) CZ12 <十二生肖> and Chow Yun Fat’s (周潤發) The Last Tycoon <大上海>.

The action packed film will revolve around Jackie Chan who plays Jackie, a.k.a. Asian Hawk, a treasure hunter for hire, seeking the bronze-cast heads of the statues looted by the French from the Old Summer Palace. These statues of the Chinese Zodiacs are considered to be China’s national treasure. Of the 12 zodiacs, 4 remain missing.

Jackie and his sidekicks Simon, David, and Bonnie join the hunt for a large reward offered by a relic collector. The daughter of a Chinese artifacts expert, Coco, whom Jackie falls in love with, convinces Jackie to recover the relics for the country’s sake instead of for the rewards. With some detective work, Jackie speculates that the statues are at the bottom of the ocean after the ship that carried the statues was sunk.

The team successfully locates and recovers the statues, only to find themselves face-to-face with an army of mercenaries and treasure hunters….

Set in 1930s Shanghai, the story revolves around the life of a crime boss Cheng Dahei, who is portrayed by Huang Xia0ming in the character’s youth and Chow Yun Fat in middle-age. The film chronicles how he builds his empire in Shanghai and his power struggles between influential local figures.

Raised in the Bund, Shanghai, Cheng is a hard working grocery clerk who is in love with the pretty Ye Zhiqiu (Yuan Li) who dreams of working as an actress in Chinese operas.

One night, Cheng mistakenly runs into the police and the wife of the grocery store owner. To stop Cheng from disclosing their secret, the two set him up and accuse him of raping the wife. Cheng ends up in jail but escapes with the help of a Kuomintang spy. Losing contact with Cheng, Zhiqiu decides to move to Beijing.

In the mean time, Cheng manages to get a position under Hong Shouting (Sammo Hung), one of the most powerful triad leaders in Shanghai. Cheng’s street smarts and courage is appreciated by Hong’s wife, and he is promoted to Hong’s right hand man. While Hong’s other members resort to violence, Cheng uses intelligence and diplomacy to handle the triad’s power struggle.

Hong spends most of his time womanizing, so he turns his gambling and opium business over to Cheng. Cheng falls in love with the number one beauty of Shanghai (Mo Xiaoqi) but she discovers she is only second in Cheng’s heart as he is still in love with Zhiqiu.

Because of a woman, Hong attacks the son of a warlord, and is arrested. With his intelligence and courage, Cheng manages to negotiate Hong’s release and is applauded by the crime leaders of Shanghai.

Cheng gains control over most of Shanghai. Due to the growing influence of the Japanese and ambition of the Kuomintang’s spy, who had saved him earlier and is now in charge of the corrupted spy agency, Cheng has to protect himself and his triad members. Cheng is caught by limited options as he struggles to survive. At this moment, Zhiqiu appears in his life again, but she is already married to another man….

Other films competing in the box office include “chick flick” of the year, The Guillotines <血滴子> featuring muscle bound Huang Xiaoming (黄晓明), Ethan Juan (阮經天), and Shawn Yue (余文樂). The film depicts an elite assassin unit in the court of the Chinese emperor.

The comedy, My Sassy husband <我老婆唔夠秤2：我老公唔生性> featuring Charlene Choi (蔡卓妍) and Ekin Cheng (鄭伊健), a continuation of the characters from the highly successful My Wife Is 18 <我老婆唔夠秤>, will also be competing for holiday ticket sales. Mainland comedy, Lost In Thailand <人再囧途之泰囧> is also predicted to do well in the box office.

Bottom of the Barrel