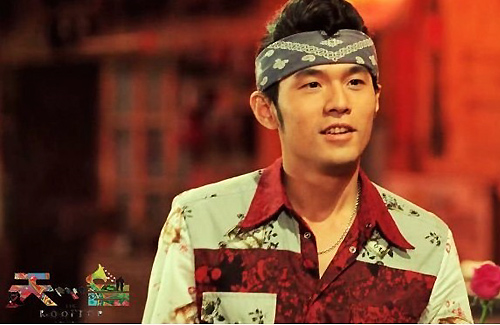 The romantic musical film, which stars Alan Ko (柯有倫), Eric Tsang (曾志偉), Wang Xueqi (王學圻), newcomer Li Xinai (李心艾), and Jay Chou himself, takes place in a fictional, seventies-inspired world where two distinctive communities with contrasting lifestyles live side by side in the vibrant town of Jialili. The “rooftop” community, consisting of poor but joyful youths who sing and dance all day, settles on top of the homes of the powerful, business-savvy upper class elite.

“We all lead very stressful and tiring lives, and I hope that I will be able to relieve the audience from all that tension with this film,” explained Jay. “It’s a film about happiness, first and foremost.”

Aside from directing duties, Jay also helmed the film’s script and soundtrack. The score will have Jay’s distinctive “China Wind” model, a musical style that mixes the elements of modern western beats and traditional Chinese melodies. The film’s trendy theme song, “Master Bo” <波爺> was written, produced, and performed by Jay; it also features the voice of Eric Tsang, who portrays Master Bo, the owner of a Chinese pharmacy.

The Rooftop will open in cinemas of Taiwan, Singapore, and Malaysia on July 11, 2013. It will premiere in North American at the 12th New York Asian Film Festival as the ceremony’s closing night presentation on July 15.