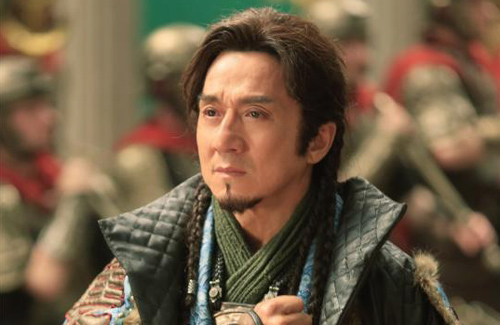 Written and directed by Hong Kong filmmaker Daniel Lee (李仁港), China’s latest historical action epic Dragon Blade <天將雄師> is already halfway into production. At a starting budget of $65 million USD, Dragon Blade is one of the most expensive Chinese-language films to ever go into production.

Dragon Blade stars Jackie Chan (成龍) as Huo An, a military leader who is enslaved after getting framed by evil forces.  John Cusack plays Lucius, a Roman general who leads a legion of 1000 soldiers to China and teams up with Huo An to protect the border of Han Dynasty China. The film is based on the mysterious history behind the City of Liqian, a now-defunct county in the northern province of Gansu, and its connection with Roman legionaries. Theories claim that inhabitants of Liqian may be Roman descendants, and the setting of Dragon Blade is inspired by this discovery.

The cast includes Adrien Brody, who portrays Tiberius, an assassin who is searching for Lucius. Amanda Wang (王若心) and Lin Peng (林鵬), who appeared in Jackie Chan’s Little Big Soldier<大兵小將>, will both star as Jackie Chan’s love interests. Choi Siwon (崔始源) of the K-pop boy band Super Junior is also on board; Siwon has previously starred in A Battle of Wits <墨攻> and most recently, Helios <赤盜>.

John Cusack expressed that he is honored to take part in the film, saying that it has always been a dream of his to work with Jackie. He said he grew up watching Jackie’s Hong Kong films as a child, and when Jackie approached his agency about the project, he immediately said yes.

On why Jackie decided on casting Cusack, he said he encountered Cusack’s portrait when he first met up with Daniel Lee at the office to talk about Dragon Blade. “I called up Cusack’s agency and they told me that he is a great actor. He had a free schedule, so that’s why we were able to collaborate.” Daniel Lee added that Cusack looks the part of an aggressive Roman general and believes that intense chemistry will spark between the two film stars. “We are very happy to be able to work with John Cusack,” he said.

The filming of Dragon Blade has recently completed filming at Hengdian World Studios and will soon begin shooting on location in the Gobi Desert and the historic city of Dunhuang. According to Jackie, the film mobilized over 700 crew members per shooting location, one of the largest crews for a Chinese film. The diverse crew frequently conversed in over ten different languages, including Cantonese, Mandarin, English, Turkish, and French, making management more difficult.

Jackie, who is also on board as producer, was always on set to help direct the film. He also said that he is touched by the team spirit shown among the crew members and said that is the atmosphere that Hollywood lacks.

Dragon Blade is scheduled for a worldwide release in February 2015.