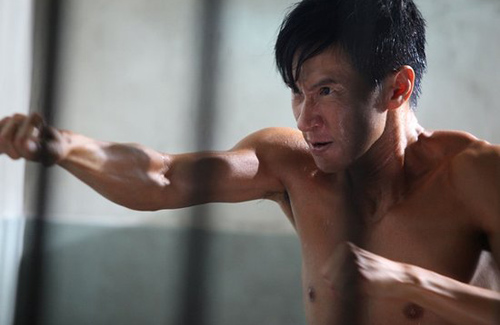 Above: Nick Cheung stars in “Unbeatable”.

Curtains fell for the 16th Shanghai International Film Festival on June 23, 2013, when the Russian film, The Major, and the Swedish film, Reliance, won three titles each at the festival’s Golden Goblets awards.

But the most popular win that night was Unbeatable <激戰> star Nick Cheung (張家輝), who took home the Best Actor award after impressing the judges with his inspiring portrayal of a retired middle-aged boxing champion in the Hong Kong film. Malaysian child actress Crystal Lee (李馨巧), who portrays Nick’s 10-year-old roommate in Unbeatable, won the Best Actress title.

Unbeatable made notable headlines in the Hong Kong media a few weeks ago when Nick released photos of his ripped body to a magazine. In regards to his win, Nick said, “It is not easy to win an award in Shanghai. Many foreign films join in the competition, and it becomes a difficult race. I am most surprised and happy that the very young Crystal Lee was able to become Film Queen. I will continue to strive and work hard. I thank all my costars and the backstage crew for their hard work.”

Nick’s Unbeatable costar, Taiwanese actor Eddie Peng (彭于晏), congratulated Nick on his Weibo, writing, “Congratulations Teacher for winning the Film King title again. You still have one technique left to teach me. [Also congratulating] Crystal for being the youngest Film Queen. This is a great start for Unbeatable. Here is hoping for a great box office!”

Bobby Au Yeung (歐陽震華) also left a message on Weibo for his former TVB costar, “Congratulations my good friend, Nick Cheung, for becoming Film King again. This is cause for a celebration!”