Given its incredible cast Bobby Au-Yeung (歐陽震華), Joe Ma (馬德鐘), and Joey Meng (萬綺雯), Shadow of Justice <伙記辦大事> was a eagerly awaited drama. However, the police drama’s viewership ratings have been declining due to its old-fashioned and unrealistic plot with too many relationship scenes. Many viewers also think that Jeannie Chan (陳瀅) is taking up too much screen time. 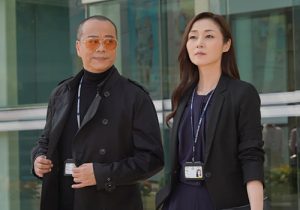 It has been over six years since Bobby and Joey have worked together, so viewers were excited to see their onscreen chemistry. However, Jeannie’s screen time is surpassing the three talented leads, who seem to be in supporting roles instead. They felt the 31-year-old actress’ skills still needs improvement, and that she does not have the ability to carry a leading role yet.

Feeling deceived, angry netizens commented sarcastically: “This drama should be called Jeannie Chan and Her Men because all the male characters are tied with her”; “I’m not used to so much screen time for Jeannie Chan” and “I tuned in for Bobby and Joe, but they have so few scenes. The entire plot is revolving around [Jeannie Chan]!”

Paired up with a stellar cast, Jeannie’s role in Shadow of Justice was obviously to propel her star power higher. With many established actresses slowly departing from TVB, the station fears they do not have enough artistes to take on bigger roles. TVB has been training a new generation of younger artistes, such as Jeannie, to headline dramas.

With her beautiful looks, Jeannie grew up in Canada and entered the industry as a model. Gaining recognition in Never Dance Alone <女人俱樂部>, Jeannie continued to take part in Raising the Bar <四個女仔三個BAR>, Life on the Line <跳躍生命線>, and The No No Girl <全職沒女>. Signing with Shaw Brothers, Jeannie has been given plenty of opportunities to shine in Greed and Ants <黃金有罪> and Beauty and a Boss <愛美麗狂想曲>, making her one of TVB’s top rising actresses.