Starring Eric Wan (尹天照), Joey Meng (萬綺雯), Kristy Yeung (楊恭如) and others, ATV classic My Date with a Vampire <我和殭屍有個約會> aired to phenomenal response in 1998, and spanned two sequels, filmed over 6 years. Now available on Disney+ platform, news leaked that the drama will be adapted into a film version helmed by its original producer Sap Sam Chen (陳十三), the husband of actress Joey Meng, who will double up as screenwriter and director.

A Prequel to the Trilogy?

Recently, reporters got wind that filming for the movie adaptation was underway on deserted school campus. According to talk, the film version has been renamed “Ghostbusting Dragon Tribe Ma Siu Ling” <驅魔龍族馬小玲> (lit. translation), and actress Karena Ng (吳千語), who has been confirmed to play “Ma Siu Ling” was spotted in a school uniform on set, raising guesses that the movie will narrate a prequel to the popular series. 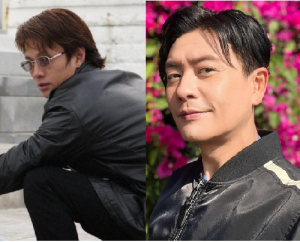 Sam Sap Chen reportedly shared that many parties had approached him to discuss a film adaptation for the series after filming for the first season was completed. Unprecedentedly, he only agreed to the project now, a full twenty-four years on, after he was moved by the investment parties. Adding that Karena Ng was “very suitable” for the role of Ma Siu Ling, he declined to reveal further details when asked if his wife Joey Meng would make a comeback cameo in the production.