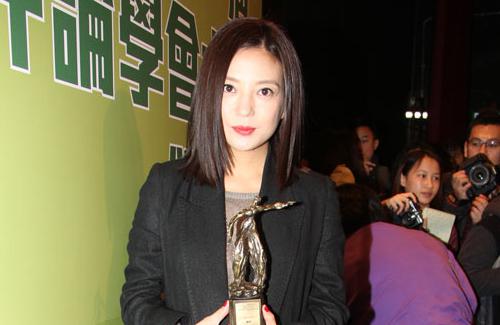 Vicki Zhao (趙薇) was in both laughter and tears when she accepted her Best Actress honor at the Hong Kong Film Critics Society Awards, one of Hong Kong’s most prestigious, but also casual, film awards ceremony in the industry. Praised for her leading performance in the 2014 drama film Dearest <親愛的>, which is directed by Peter Chan (陳可辛), Vicki accepted her trophy from Paw Hee Ching (鮑起靜) in tears. This is her first Best Actress award from the Hong Kong Film Critics Society.

Vicki also accepted the Best Screenwriter award on behalf of Dearest’s writer Zhang Ji (張冀), who was unable to fly to Hong Kong to receive the award. Paw Hee Ching praised the film and said she cried watching it.

Other artists recognized at the Hong Kong Film Critics Society included Sean Lau (劉青雲), who won Best Actor for his performance in Overheard 3 <竊聽風雲3>, and Fruit Chan (陳果), who won best Director for The Midnight After <那夜凌晨，我坐上了旺角開往大埔的紅VAN>, which also won Best Film.

Alibaba Pictures’ first production is Wong Kar Wai’s (王家衛) The Ferryman <擺渡人>, which is scheduled for a release in late 2015. The company is also producing Stephen Chow’s (周星馳) The Mermaid <美人魚>, which opens 2016, and the rumored upcoming sequel to 2013’s smash hit Journey to the West  <西遊·降魔篇>.