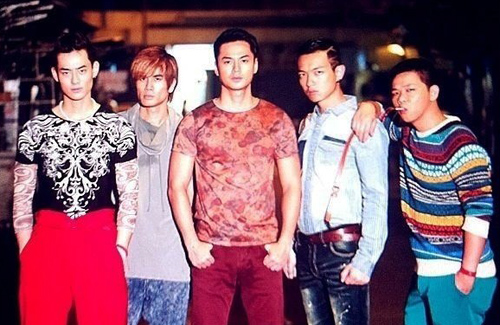 The young cast of Young and Dangerous: Reloaded <古惑仔：江湖新秩序> graced the red carpet at Mongkok on Tuesday night for the gala premiere of the film adaptation of the classic comic book series, Teddy Boy <古惑仔>. The stars talked about their experiences and expectations in the highly-anticipated film, which opened in Hong Kong, Macau, Singapore, and Thailand cinemas on January 10, 2013.

“When filming was over, I felt like I’ve released a heavy burden,” said Him Law (羅仲謙), who stars as the film’s protagonist, Chan Ho Nam. However, Him found his nerves tensing up again at the start the gala premiere.

Young and Dangerous: Reloaded, released in both Category III and IIB versions, will be going against major blockbusters such as The Grandmaster <一代宗師> and The Last Tycoon <大上海>. Him expressed that he is more concerned about whether or not his portrayal of Chan Ho Nam will be accepted by the audience, rather than the film’s box office.

Asked if rumored girlfriend, Tavia Yeung (楊怡), plans to support the film, Him smiled, “I believe that she will support my films.” However, the 28-year-old actor did not ask Tavia for acting tips during the filming of Young and Dangerous: Reloaded, and said, “It’s a very masculine film, so I think it is better to ask a man for advice.”

Him was a fan of the nineties film adaptation of Teddy Boy, Young and Dangerous <古惑仔>, which starred Ekin Cheng (鄭伊健) as Chan Ho Nam. However, Him avoided re-watching the original series, expressing that he did not want to copy Ekin’s style.

Oscar Leung (梁烈唯), who portrays Chan Ho Nam’s sidekick, Chicken, is currently in lawsuit with Kenny Wee (黃浩). Asked for his thoughts on “counter-suing” Kenny, Oscar said, “Don’t use that term. I just want to retrieve my justice through the law.”

Oscar estimated that the lawyer retaining fee would cost up to a six-figure sum. “Besides my family, my friends are also willing to lend money to me. Thanks for their concern and love. I am able to handle it myself. Even my neighbors are voicing out their support for me! I am very happy. Justice lies inherently in the hearts of the people. I am not worried.”

Winnie Leung Bares It All

“It was embarrassing when we had to re-watch that scene together,” said Winnie as she recalled her filming experience with Sammy. “Luckily, everyone was satisfied with our performance.”

16 comments to “Young and Dangerous: Reloaded” Premieres in Hong Kong