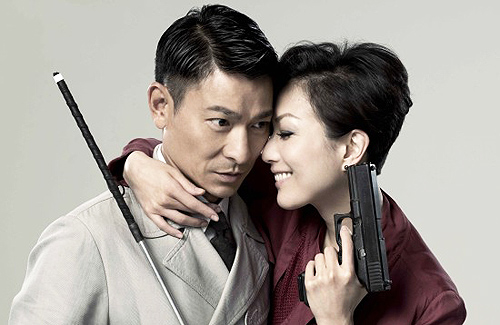 Andy Lau (劉德華) and Sammi Cheng’s (鄭秀文) collaborations have traditionally been box office hits, but the two have not shared the screen since 2004’s Yesterday Once More <龍鳳鬥>. After nine years, the “Box Office Golden Duo” finally reunite in upcoming police thriller Blind Detective <盲探> and sing the theme song for the film.

The Johnnie To (杜琪峰) film began production in October 2011, but progress was slow due to director’s perfectionist nature. In past interviews, Andy lamented that filming took so long because To would ask for a re-shoot whenever he thinks Andy moved his eyes. The movie was also delayed last year when Sammi suffered from Ménière’s Disease which affected her hearing and balance. After years of hard work, the film finally debuted last month at the Cannes Film Festival during its coveted midnight screening slot, and is set for wide release in July.

Blind Detective is set in Hong Kong during the 1990s. Sammi plays Ho Ka Tong, a police officer whose good friend Siu Man disappeared a decade ago and was never seen again. Ah Tong is determined to locate her missing friend and worked hard to investigate. On the way, she meets former star detective Johnston, played by Andy, who became blind during an operation when his retinal detached. Johnston was then forced to retire from his job at the police crime squad. To compensate for his blindness, Johnston developed an excellent sense of hearing and smell, causing Ah Tong to recruit him for her investigations. The two must find their way through a series of gruesome murders and horrid crimes to uncover the hidden truth.

Last week, Media Asia distributed the theme song of Blind Detective. Andy and Sammi helm the tango-infused number, released in Cantonese as “Blind Love” <盲愛> and in Mandarin as “Not Blind, No Love” <不盲不愛>. The songs were written by Canadian composers Hal Beckett and Marc Baril, with lyrics by famed Hong Kong lyricist Albert Leung (林夕). The dramatic songs capture the excitement of Ah Tong and Johnston’s criminal chase, and describes the blinding desire of a whirlwind romance through a series of clever wordplay.

The theme song received positive reviews since its release, and many fans expressed excitement over Andy and Sammi’s return as an on-screen couple.

Blind Detective will be released in Hong Kong on July 4, in China on July 11, and in Taiwan on July 26.

“Not Blind, No Love” in Mandarin (Audio Only)