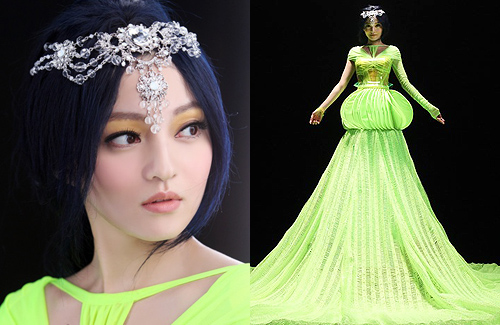 Taiwanese singer Angela Zhang (張韶涵) recently released her newest song, “When You Live for Love” <為愛而活>, which continues the storyline introduced in her first single, “Bandage” < OK蹦>. Her upcoming self-titled album, which will be her eighth studio release, will release on March 7.

The MV for “When You Live for Love” is a continuation of the “Bandage” MV, in which viewers witnessed the creation of a futuristic humanoid played by Angela. In the second installment of the story, her scientist creator appears to have fallen into despair over the future of humanity, especially after a destructive virus enters his workplace. However, as the humanoid Angela accumulates more human experiences and knowledge, she learns that love is the only truth that can be still be believed. In the end, she sacrifices herself to save her creator.

The production, design, and promotion for Angela’s new album were handled entirely by the singer herself, who shared that she was surprised at the amount of work necessary to reach the final result. Nevertheless, she did not back down from the challenge, not even when expenses for the album and its MVs reached 20 million RMB.

“I know that the current consumer patterns have changed, and that material sales have already been replaced by digital sales,” said Angela. “But it has been my dream for the past many years to personally experience this process. As long as I continue making good music and putting out good products, the music industry will have hope and a future.”

Angela’s upcoming album is a blend of Chinese and Western elements – several of its songs are composed by foreign songwriters, with words penned by well-known lyricists like Yao Ruolong (姚若龍) and Sodagreen’s Wu Tsing Fong (吳青峰). Angela’s good friend Kenji Wu (吳克羣) contributed to a song as well. The album also features audio mixing by music engineer Tom Coyne, who has worked with Beyonce, Adele, Avril Lavigne, and U2, and post-production by Korean-American musician Jae Chong.

“When You Live for Love” MV

TAGS: Angela Chang, Angela Zhang, When You Live for Love