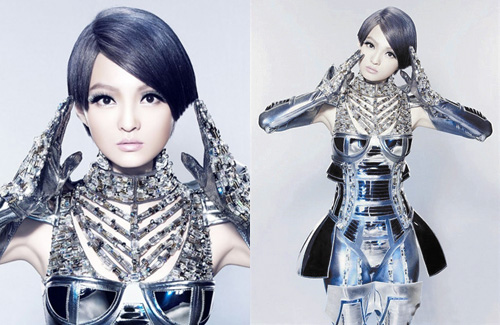 Taiwanese singer Angela Zhang (張韶涵) recently appeared as a guest on a radio show to promote her upcoming album Angela Zhang <張韶涵>, which is expected to drop in Taiwan on March 7, 2014. Released by Wonderful Music, Angela Zhang is Angela’s eighth full-length studio album. The lead single “Bandage” < OK蹦>, an electropop dance song, recently had its world premiere on Hit Fm. Its music video, which covers the themes of robots and humanoids, premiered on video sharing websites earlier this month.

Living for love is the central theme of Angela’s new album. Currently single, Angela admitted that she has a rather unique perception of love. She explained that she loves staying at home, and revealed that there was one point in time when she did not leave her house for two straight months. Over the New Year holiday, Angela once watched twenty films in a row, and hoped that her future partner would be able to appreciate her laid-back lifestyle.

“I also anticipate meeting someone who can bring out the romantic side of me,” Angela said with a laugh. At the moment, Angela is busying herself with her career and even spent Valentine’s Day choosing the cover of her new album.

She added that she hopes her future partner will also be a workaholic. “He should also not be so particular about holidays.” Like many girls, the 32-year-old hopes to have a romantic marriage. “When the time comes in the future I will get married and have kids.”