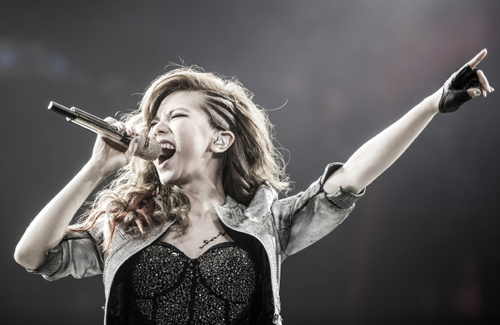 Since G.E.M. shot to fame from her appearance in Mainland Chinese singing competition I Am A Singer 2 <我是歌手2> last year, she has been busy making various appearances in China. Her last world concert series toured 23 cities, including cities in China, Australia, and New Zealand.

Despite her popularity, controversy followed G.E.M.’s fame. She has been criticized for having attitude problems on multiple occasions, and was called out for being disrespectful to other more senior singers. Last November, when she held a press conference to promote her current Hong Kong concert, G.E.M.’s “diva behavior” was once again brought to light when her manager initially refused to hold separate interviews for traditional print media outlets and digital media outlets.

At Hong Kong’s Metro Radio Hits Music Awards, which was held last December, G.E.M.  was late to both the awards ceremony and the afterparty, leading the media to criticize G.E.M.’s lack of consideration for others.

Controversy continues to stir for G.E.M. at her Hong Kong Coliseum concert. It was said to be one of Hong Kong’s most overpriced concert in recent years. The concert organizers were very strict, and did not allow fans to bring their own lightsticks into the venue. Each seat at the venue was supplied with a glowing bracelet, but only fans sitting at the more expensive areas were allowed to bring the bracelets home. Fans sitting at the back had to return them for other fans to use them the next day.

Many fans were upset that G.E.M.’s concert setlist included only six Cantonese songs, despite the fact that the majority of G.E.M.’s discography is in Cantonese. Fans were especially upset that G.E.M. did not perform “Where Did U Go”, the song that made G.E.M. a household name in Hong Kong. Instead, a majority of G.E.M.’s setlist were Mandarin songs she performed while competing in I Am A Singer 2.

Some harsher critics called G.E.M.’s concert for being a “Mainland China’s I Am a Singer night” and suggested her to give up her Hong Kong passport for a Chinese passport instead.

Despite the criticism, G.E.M.’s fanclub remains supportive. They left encouraging messages for her and dubbed her as Hong Kong’s pride. They told G.E.M. not to be unhappy about the negative rumors and reassured her that she has still many fans around the world who support her work.