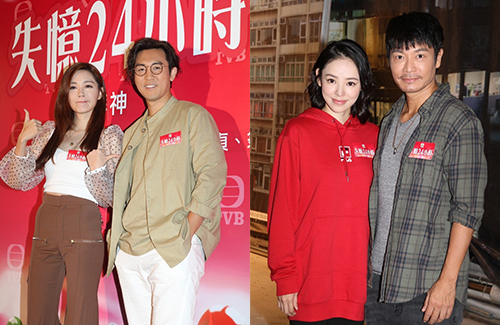 Starring Roger Kwok (郭晉安), Shaun Tam (譚俊彥), David Chiang (姜大衛), Grace Wong (王君馨), Zoie Tam (譚凱琪) and Roxanne Tong (湯洛雯), TVB drama 24 Hours of Amnesia <失憶24小時> greeted the press this week for its blessing ceremony. A light-hearted comedy, 24 Hours of Amnesia focuses on the relationship between Roger and Shaun, the former a compulsive liar and the latter a renowned designer, who learn about each other’s lives.

But having different lifestyles isn’t the only thing that sets Roger and Shaun apart—their bed scenes are totally different too.

For the series, Shaun reunites with his Forensic Heroes IV <法證先鋒IV> costar Roxanne Tong. Playing a couple, Roxanne shared that she will debut her first onscreen bed scene with Shaun. Asking if the scene is comparable to Jonathan Cheung (張穎康) and Crystal Fung’s (馮盈盈) shower scene in The Man Who Kills Trouble <解決師>, Shaun said, “It won’t be that bright. Ours will be a little more moody, but it’ll all be within broadcasting limitations.”

Stressing that she’s never done a bed scene before, Roxanne said, “It’s just an intense version of a kissing scene. Because it’s not set in stone yet, I don’t have an image of how it’s going to play out. I don’t even know how my home will look like yet. However, I’m not worried. I know Shaun will lead me well.”

As a more experienced actor, Shaun said that should be his responsibility. “I will brush my teeth and take care of my breath.” Roxanne joked, “But I love eating hot pot and garlic.” Shaun said, “I know, that’s why I’ll even it out.”

Meanwhile Roger and Zoie, who plays his wife, will have a completely different bed scene altogether.

“TVB really cares about your wellbeing,” Roger joked. “I get to be around with so many pretty girls.” Asking if they will have a bed scene similar to Shaun and Roxanne’s, Zoie said, “My son and I will have a bed scene.” Roger added, “Me too. Our son is the basis of our relationship. It’s actually a very realistic portrayal of a family.”