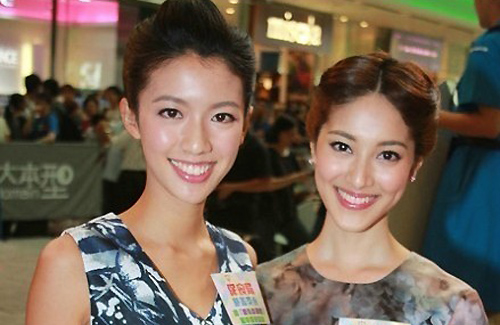 As the audience’s favorite since the start of the pageant, it came as no surprise when Grace successfully won the crown that night. Since the age of 8, she has dreamed of entering a beauty contest. However, she revealed she felt great pressure. “It is both a good thing and a bad thing. I put a lot of pressure on myself. People told me to take everything easy and just think of it as playing around. I told them that I wasn’t playing around. I was serious!”

Grace grew up in a rich family, but she never took advantage of her background. When she was studying, she insisted on finding a job to earn money instead of asking her parents for allowance. Grace also revealed she has learned to speak in a smart and calm manner since childhood. “I communicated with my family like this ever since I was young. I rarely blurt things out before thinking it through.” In the future, she hopes to become a successful host.

First runner-up, Sisley, presents herself as an active girl who tends to be quite blunt with her remarks. She revealed everything she does is based on how she feels. Speaking of romantic relationships, Sisley expressed, “Right now is the beginning of a new page in life. I won’t sacrifice what I have achieved with all my effort for love!” Is life different for Sisley after the pageant? She exclaimed, “There are more people who smile at me on the streets. I’m very surprised!” At this point, Sisley remains indecisive about whether she would consider pursuing a career within the entertainment industry, but said that a clerical job would not be suitable for her active personality.

Moon, who is the second runner-up in this year’s pageant, was very prepared for competition night. Besides having signed a contract with a modeling agency in the past, she had also majored in film during university and carried herself well in front of the camera. Furthermore, her mother, Lam Giu (林嬌), was a contestant in the 1985 Miss Hong Kong pageant. Moon revealed, “I have experience in this aspect, and I’m not afraid when a camera is pointed at me. It’s my advantage over the other girls.” Her mother’s support was also an important factor in providing her with confidence.

Some people thought this year’s Miss Friendship winner, Tammy, may appear mean since she does not smile often, but she revealed she has always been this way. “I look the same whether I’m happy or angry. People think I look mean when I don’t have any expressions on my face. But actually, I’m expressionless even when I’m telling funny jokes.” Plagued by rumors since the start of the pageant, Tammy has been tolerant. “Since I was young, my mother taught me to stay away from mood swings and to not show everything on my face. Right now, I usually don’t have many expressions, and I tell myself things would be fine if I continue to tolerate. If I were to choose whether or not the media should write reports on me, I would still choose yes. Since I entered the pageant, I wantto enter the entertainment industry. I hope the initial bitterness will later turn into sweetness.”