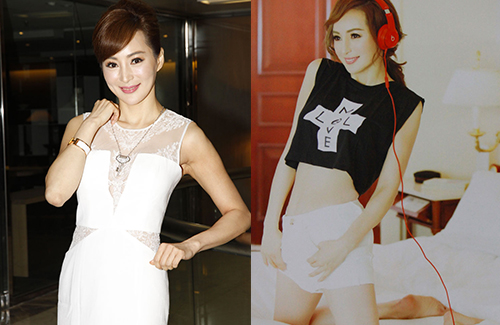 49-year-old sexy icon Candy Law (羅霖) is back in business. The former Miss Asia winner used to be one of Hong Kong’s most popular icons in the mid-nineties, but after getting married and becoming a mother of three, she slowly retired from showbiz, opting to focus on her family and her agency business instead.

Releasing a photobook a June, the 49-year-old showed that she still has what it takes to be sexy. Praised for having a voluptuous figure and flawless skin, Candy’s popularity increased significantly after the release of her photobook. A Japanese television station even invited her to an interview.

She said, “It’ll be great if my photobook can really break into the Japanese market, but I need to concentrate on the Guangzhou promotions first.”

The release became a hot topic. A professional photographer pointed out that some of the spreads appeared to be poorly photoshopped, revealing many slip-ups. In the spread, Candy posed in front of a mirror, and her reflection on the mirror showed a thicker waist and smaller hips. Many netizens also began to search for other clearly touched-up photos, and observed that her face, hips, and waist were photoshopped the most. Candy’s company responded by saying that while there were slight touch-ups in the pictures, especially in lighting and color, most of everything else was natural.

At a gallery event, Candy responded, “The photos are not photoshopped, and I already mentioned this in an earlier interview. Sometimes, different mirrors can reflect a person to be wider or thinner. However, I thank everyone for helping me promote this photobook. Everyone should come to the book fair and see me! They’ll know which is real and which is fake if they see the real me. I have confidence.”

Candy will be promoting her new photobook at the upcoming Hong Kong Book Fair on July 19, where she will be holding an autograph session. All 150 lottery tickets for the signing were sold out.