Here are five interesting facts about the rising star:

When he was 4, Kang Hoon debuted in 2013 through MBC’s entertainment show Mom and Dad from Today. Within three years, he already participated in nine projects and gained notice for his dramatic roles.

When he turned 10, Kang Hoon was dubbed a “genius actor” after winning the Best Young Actor Award at the 2019 KBS Drama Awards for his role as Gong Hyo Jin’s son in hit drama When the Camellia Blooms. He was also one of the youngest nominees for the Best New Actor in Television at the 56th Baeksang Arts Awards. 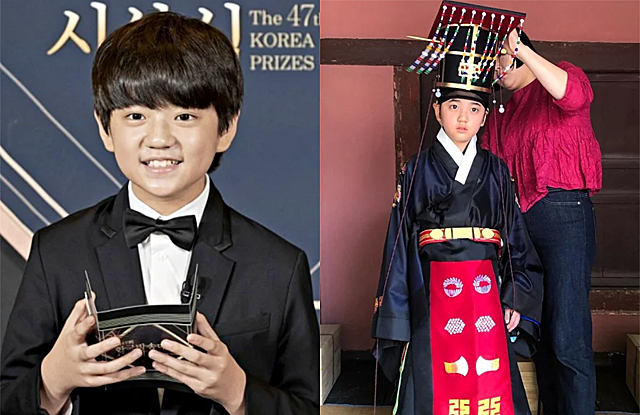 Since 2014, Kang Hoon has starred in over 32 projects across dramas and films and in a range of genres from modern to historical. He has played as the younger version of several top stars such as Nam Goong Min in Good Manager, Ju Ji Hoon in Kingdom, and Kim Jung Hyun in Mr. Queen. His current portrayal in Reborn Rich is also highly noteworthy as netizens commented how he is even outperforming Joong Ki with his skills.

This year, Kang Hoon signed under agency Awesome Entertainment which houses Park Seo Joon and Kim Yoo Jung. While he has many seniors to learn from, Kang Hoon previously shared that his role model is actor Kang Haneu who played his stepfather in When the Camellia Blooms.

Additionally, Kang Hoon is also a huge fan of BTS’ Jimin. He had uploaded videos of Jimin and was fanboying over him on his social media. Fans found his innocence and youthfulness very cute as it shows a significant contrast to some of his dark and angsty performances on screen.