Aaron Kwok in USA for Concert 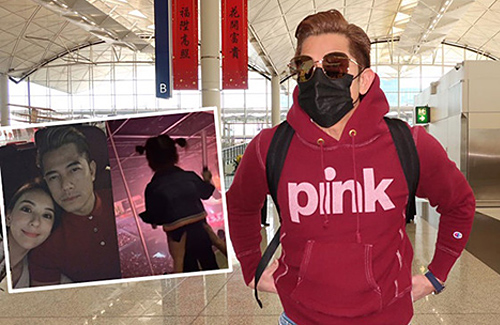 Due to the coronavirus, his wife Moka cancelled plans to return to Shanghai, staying put in Hong Kong instead.

Aaron Kwok (郭富城) along with his manager Siu Mei (小美) and a few other colleagues, set off to the United States for his world tour, dressed in a red hoodie top and donning a black face mask with shades. While checking in, Aaron distributed red packets to members of the crew who were travelling along with him, and also taught them the right way to wear a mask.

Seeing reporters at the scene, Aaron and Siu Mei wished all good health and shared that workers had prepared sufficient resources to protect against the outbreak.

With the virus situation becoming more and more serious, Aaron was asked if his wife Moka Fong (方媛) is worried if he is travelling overseas during this time. He replied, “My trip this time is around 10 days. My wife is not coming along, she is also worried and constantly reminds me to wear a mask”

The couple made preparations to protect their little children who are not of schooling age yet, so they stay home and sing karaoke. Aaron shared that Moka had intended to return to Shanghai while he was heading to the United States, but her trip was cancelled and she would stay in Hong Kong instead. Asked if he had restricted Moka from returning to China, he said, “No, it is better for everyone to stay home during this period, and not go onto the streets if it can be helped.”

Staying updated with latest news on the virus outbreak via his tablet, Aaron did not forget to wish everyone good health before heading for his flight.

Netizens Dig Up the Past of Aaron Kwok’s New Girlfriend

2 comments to Aaron Kwok in USA for Concert