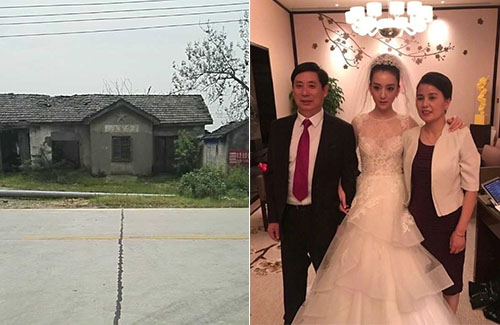 Moka made her debut in the Hong Kong in 2012, when she released her first photobook. Her relationship with Aaron was exposed in November 2015, when Moka was seen staying over at Aaron’s home for six days. Aaron finally confirmed the relationship in December 2015.

The couple stayed modest and low profile about their relationship after the announcement. Their wedding ceremony was just as inconspicuous—Aaron only invited close family and friends to witness their union, totaling 8 tables. According to her neighbors, only Moka’s parents and a few of her relatives attended the wedding.

In the stream, Moka’s childhood home—a simple cottage—was visited. Her neighbors shared that Moka went to Shanghai soon after her high school graduation. She studied accounting, but later decided to become a magazine model.

Moka’s humble beginnings and hard work ethic still impresses her peers. Her apartment in Shanghai was purchased before she met Aaron. Her hometown friends and neighbors had positive reactions toward her marriage to Aaron, and they wished her happiness and success in the future.