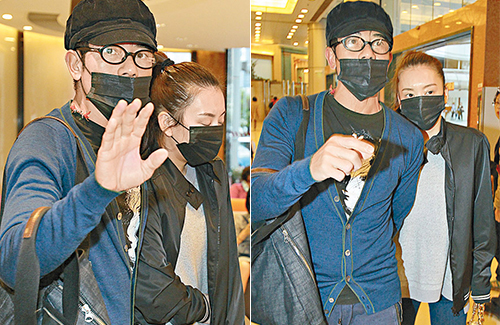 The paparazzi hounded Aaron Kwok (郭富城) and his girlfriend, model Moka Fang (方媛), when they were spotted at the Hong Kong Sanatorium & Hospital in downtown Happy Valley. The couple, dressed in matching blacks, stayed in the hospital for about three hours. Moka looked pale and appeared to be sick.

After a chat with their doctor, Aaron walked Moka outside, where they were greeted by the Hong Kong paparazzi. Surrounded by reporters, Aaron refused to answer questions about their marriage rumors, and only said “thank you” and “be careful” as they walked to their mini van.

Asking if Moka was okay, Aaron said, “Probably ate something bad.” (Is she pregnant?) “Of course not.”

When they boarded their mini van, Aaron bid the reporters farewell and waved.

Aaron and Moka, who is 23 years his junior, began their relationship sometime around late 2015. Aaron revealed his relationship status with a simple message he left on social media in December 2015. Moka is Aaron’s first openly-acknowledged relationship.

5 comments to Aaron Kwok Takes Girlfriend to the Hospital

Michelle Ye Urges the Public to Not Eat Desert Locusts